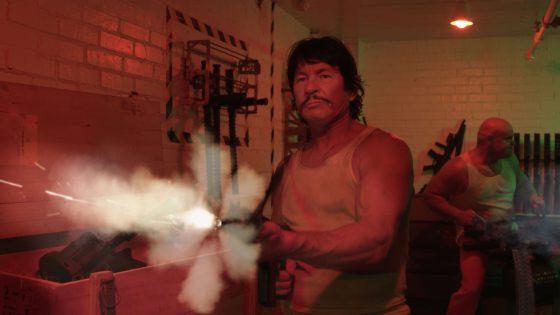 Robert Bronzi burst onto the scene in 2017 with the awesomely fantastic gimmick that he looked like the resurrected Charles Bronson, albeit with a thick Hungarian accent.  For his latest action role, he’s thrown into the notorious Pleasant Hill Penitentiary for Escape from Death Block 13.

Bronzi plays Mick Kovacs, who comes to America looking to collect money owed following his brother’s death at a rubber recycling plant.  After a disagreement and fight with the shady owner of the plant (played by twitchy character actor Nick Turturro), Mick is arrested for multiple crimes.  Awaiting transfer to prison, he gets offered a deal by a detective and a mysterious federal agent to act as an informant for them and try to bust up a massive drug ring operating out of the prison.  Mick reluctantly agrees and finds new allies and new enemies inside Pleasant Hill Penitentiary.  Escape from Death Block 13 follows a lot of the beats you would expect from a prison exploitation movie, like Mick getting the lay of the land from friendly fellow convicts, running afoul of the bruiser who runs the prison block, running afoul of the evil warden, etc.  If you are feeling charitable, you would say it’s an homage to that genre and if you aren’t, you would probably call it a cheap knock-off.  It does show its budget frequently, from terrible, stock CGI effects to clearly paintball guns being held by the prison guards but it at least shot at a real prison and recycling plant and some practical gore that is fun.  The ending with the actual titular Escape from Death Block 13 is when the movie finally truly shines and embraces the schlocky insanity that had been peaking through throughout the rest of the movie and there are lots of ridiculous beats to enjoy.  It is a bit of a slog to get to that point and I wish the whole movie had the same insane energy of the finale, like more ridiculous gore or more cartoonish characters.  Debbie Scaletta, who plays Warden Jack, definitely could have taken some cues from say, Joan Allen in Death Race, and really leaned into the sadistic side of her character but plays it more as the unsuspecting villain who plays everything pleasantly with veiled threats.  The movie does kind of lose the thread of its already thin plot fairly quickly as Mick is supposed to be investigating a drug ring in the prison but there’s really one scene where he stumbles across drugs but the rest of the movie is typical prison thriller survival stuff.

Bronzi is doing exactly what you would expect if you’ve seen some of his other movies which replicate the stoic Charles Bronson persona and when he’s being silent and badass, the illusion really works.  When he speaks is when the illusion gets shattered a bit but he has some decent one-liners and quips.  Lawrence Hilton-Jacobs seems to be one of the actors who truly understands the assignment and plays his mysterious Agent Langley like he’s in a 70s exploitation movie and makes a meal of his few scenes.  In terms of actually good acting, Tim Lovelace as one of Mick’s new allies in prison, Tex, is giving a legitimate acting performance and is actually fairly nuanced and dramatic.  Some of the other characters in prison are over the top but help make things entertaining and you expect some crazy characters in prison, so it works.

Escape from Death Block 13 is not a good movie but it has some schlocky charm, especially during the over-the-top finale.  I wish the whole movie had that same crazy energy as there are times where it’s kind of a slog but Robert Bronzi is definitely keeping the spirit of Charles Bronson alive and this really feels like something he might have done under Cannon Films, albeit with probably a slightly higher budget.  Escape from Death Block 13 is out now on DVD and On-Demand.