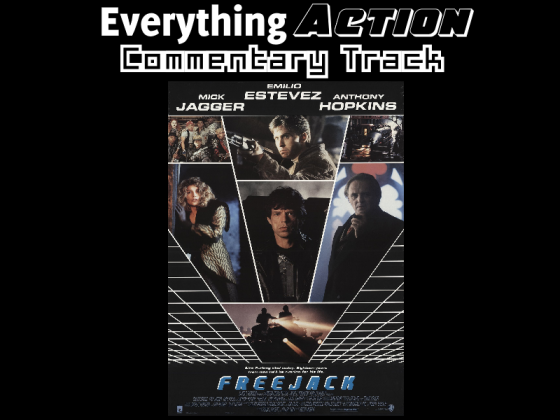 For the first Everything Action Commentary of 2022, Zach and Chris celebrated the 30th anniversary of Freejack by watching the 1992 sci-fi/cyberpunk “classic”(?).

Emilio Estevez stars as Alex Furlong, an F1 race car driver who is teleported the second before his fiery death in a race to the far-off future of 2009.  He’s been taken from the past to be used as a vessel for a rich patron who wants to implant his mind into Alex’s body but Alex escapes and becomes a “Freejack”, hunted down through future New York by Mick Jagger and his “Bonejackers”.  The guys try to figure out how the teleportation technology works, how often someone becomes a Freejack that there’s a whole term and team of people hunting them down, what movies Freejack borrows from, the anti-aging of Rene Russo, and more. Freejack is on HBO Max and you can sync it up and watch along with the Everything Action crew.