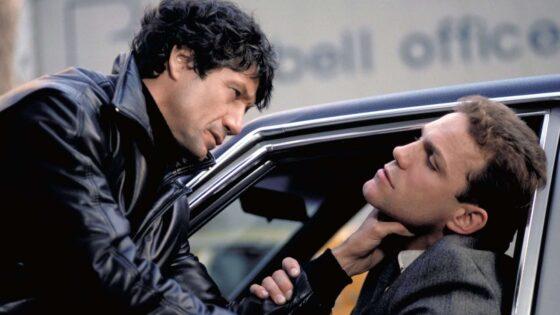 One of the roles the late Fred Ward was known for was Remo Williams in 1985’s Remo Williams: The Adventure Begins.  Based on a series of books, The Destroyer series, Orion Pictures hoped that The Adventure Begins would be the first in a series of James Bond-style adventures but the critical and commercial failure of the movie ended the series before it even began.  Fred Ward played Remo Williams, an ex-cop and Marine who becomes an assassin/secret agent for a special US organization called CURE.  Learning various martial arts techniques from his Korean instructor, Remo then sets out to stop a corrupt weapon procurement program within the US military.  Along with hiring an actual James Bond director to direct the film, Goldfinger and Live and Let Die’s Guy Hamilton, the movie also had a musical theme song from Styx lead singer Tommy Shaw, “Remo’s Theme (What If)”.  The song was not included on the movie’s soundtrack album, which was just the score, but Shaw featured it on his 1985 solo album What If.  Shaw also filmed a music video for the song, which features the movie’s Statue of Liberty replica that was built in Mexico for the film and is the location of the movie’s biggest and most memorable set piece, where Remo fights bad guys along the scaffolding of the Statue of Liberty that was in place for the statue’s centennial anniversary.  Check out the music video below.