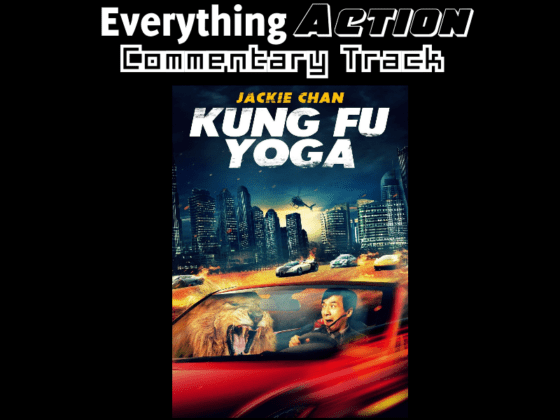 For the latest Everything Action Commentary, Zach and Chris are joined by special guest Phil from Digital Pimp to journey around the world with Jackie Chan for the over-the-top insanity of 2017’s Kung Fu Yoga.

Jackie plays Professor Jack, China’s greatest archaeologist who is approached by his beautiful counterpart from India, Ashmita (Disha Patani), to help recover the lost Maghda treasure, which was lost during an ancient battle involving Chinese and Indian armies.  A rich villain, Randall (Sonu Sood) is after the treasure as well and Jack and his team have to dodge his henchmen as they journey from Tibet to Dubai to India in search of the gold.  The guys try to figure out why the opening scene of the movie looks like a Dynasty Warriors game, the crazy scene that the poster comes from with Jackie in a car with a lion, the extremely episodic plot structure, the big Bollywood dance number ending, and more.

You can watch Kung Fu Yoga on Prime Video and sync it up with our commentary below to watch along with the Everything Action crew.

Special thanks again to Phil for joining us, you can find him at www.digitalpimponline.com and on Twitter @PimpTour.