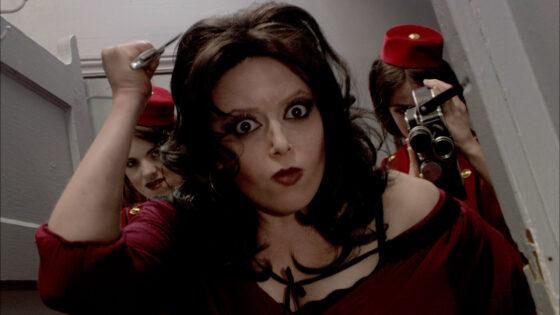 Originally debuting at the San Fransisco International Film Festival in 2010, All About Evil had a limited theatrical run before disappearing underground. But the homage to all things cult and gory is back on Shudder and on Blu-ray from Severin Films.

All About Evil stars Natasha Lyonne, currently starring in Netflix’s Russian Doll, as Deborah Tennis.  Deb’s father ran the Victoria Theater, a haven for cult horror but financially unsuccessful.  After his passing, Deb continues to try and run the theater along with her day job of being a librarian but her horrible mother Tammy (Julie Caitlin Brown) wants to sell the theater to land developers.  Snapping, Deb kills Tammy and then rushes to play the movie that will be playing that night at the theater, instead playing security footage of her murder.  The audience believes it’s an original horror short and loves it, prompting Deb to continue making movies with unwitting actors as the victims.  She gets help from projectionist Mr. Twigs (Jack Donner) and a trio of maniacs she hires as theater employees (Noah Segan, Jade and Nikita Ramsey).  One of the Victoria regulars, Steven (Thomas Dekker), is at first a fan of the new original movies like everyone else but slowly begins to realize that something sinister might be up when people he knows start disappearing.  The premise is great and there’s tons of ridiculous fun to be had with Deb and her crew filming their “movies” and Deb’s increasingly crazed diva attitude but there’s not really an arc to her character.  She goes from 0 to 100 almost immediately and it might have been more interesting if she was killing people who she decided “deserved” it and then began crossing the line but she and her crew almost immediately go to killing innocent bystanders.  As an over-the-top villain, Lyonne is great but as a character, there probably could have been a little more done to show her evolution into a lunatic director.  The Steven storyline is also a little undercooked, especially his group of friends who are pretty underdeveloped, which makes it hard to care when his friend Judy (Ariel Hart) goes missing.  The actual movies that Deb and her crew are making are wonderfully over the top and gruesome, with clever touches like all of them having literary pun titles like Gore and Peace that play to Deb’s past as a librarian with the hilarious additional layer of them being PSA for stuff like keeping your cellphone silent or not talking in the theater.  There are also some gruesome and creative kills, including a horrific scene involving sewing someone’s mouth shut and a crazy kill that involves the breasts of one of Deb’s victims.  The influence of cult horror movies like Blood Feast and the works of Vincent Price is all over the film, from posters at the theater to just characters referencing and talking about them.  It’s also in the cast as well, with Jack Donner clearly meant to evoke Vincent Price, John Waters’ regular Mink Stole playing one of the victims, and the iconic Mistress of the Dark Cassandra Peterson playing Steven’s mother (and doing some legitimately real, dramatic acting amidst all the craziness).

Natasha Lyonne gives a hilariously deranged performance as Deb, although I was a little worried from the first few minutes when she was in her meek librarian mode.  Once she gets her first taste for blood, she goes all in, adopting ridiculous accents for her various movie characters and beginning to talk outside of her acting like a combination of Betty Davis, Joan Crawford, and Mae West.  Her film crew are all great and unhinged as well, especially Noah Segan as Adrian, who they literally pull off the street after he almost beats a woman to death, and Jade and Nikita Ramsey, who play twins that get “hired” by Deb straight out of a mental institution and are the classic “creepy twins” that we’ve seen in movies like The Shining.  Thomas Dekker is fine as Steven but the villains of the movie definitely steal the spotlight.  As mentioned, amidst all the intentionally over-the-top and campy acting, Cassandra Peterson gives a real and grounded performance as Steven’s mother Linda, which definitely stands out amongst the rest of the cast.

If you’re a fan of splatter movies, cult movies and the midnight movie vibe, All About Evil is an entertaining and over-the-top love letter to the genre.  Natasha Lyonne gives a great, unhinged performance and there are some creative kills and gory effects that do justice to the movies it is paying homage to.  The movie is available to watch now on Shudder and it’s on Blu-ray from Severin Films.

One thought on “Review: All About Evil”