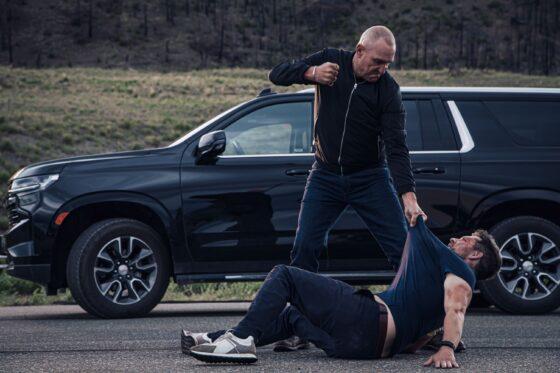 Clayton plays “The Thief”, an unnamed criminal who pulls off a heist of millions from crime boss Temple (Jones).  Trying to escape from Temple’s men at their headquarters, Clayton steals a car that turns out to have Temple’s wife Mia (Lina Lecompte) hiding in the trunk, trying to pull off her own escape plan with her unborn son.  The pair form an uneasy alliance in their joint effort to escape Temple, who sends his men, including French martial arts assassin, The Frechman (Janvier Katabarwa) to find them, recover Mia, and kill The Thief.  Bullet Proof doesn’t do too much new for this type of story and some of the plot beats will be fairly predictable for fans of the genre.  It does have a sense of humor that is refreshing compared to stuff like the “geezer teasers” that flood Redbox and streaming services and gives Bullet Proof an actual personality.  The Thief puts on Christopher Cross’s “Ride Like the Wind” during his initial escape from Temple’s compound, for example, and it feels like Clayton is a fan of Edgar Wright, as there’s some of his quick-cut editing style that builds to a pretty funny payoff.

Action-wise, Bullet Proof actually has lots of practical action that, while maybe not redefining the genre, is all solidly done and entertaining.  There are some solid car chases in interesting locales, like a junkyard in the opening set piece, and some decent shootouts and fights sprinkled throughout.  Clayton handles the action well, both behind and in front of the camera, and puts some fun flavor into things, whether it’s one-liners and reactions to things or a great running bit where Mia puts herself between The Thief and Temple and his men, which protects him as she knows Temple won’t risk himself or his men harming her and her baby.

Vinnie Jones is giving a classic Vinnie Jones heavy performance as Temple, beating people down with brass knuckles and making threats of violence against The Thief and others.  Temple also has a colorful crew of henchmen, including the aforementioned Frenchmen, who shows off both martial arts prowess and skills with heavy weaponry, and Skinny (Danny Mac), a Post Maloneesque tattooed henchmen who gets more sadistic as the movie goes on.  Character actor Glenn Ennis rounds out Temple’s main henchmen as Griz, who begins to have second thoughts about his boss and his desperate attempts to recover his wife.  As Mia, Lena Lecompte starts out a little annoying and shrill but gradually, as she and The Thief bond, she becomes more likable and is actually an active participant in a lot of the action instead of just being a passive victim.  James Clayton is a solid action hero and has a fun sarcastic/cocky attitude that adds to the overall sense of fun and not taking itself too seriously that the movie hits with its tone.

Bullet Proof isn’t going to redefine the action genre but it is an entertaining and solid movie with a great as always Vinnie Jones villain role, some fun set pieces, and an attitude where it doesn’t take itself too seriously.  Bullet Proof is out now on Blu-ray.