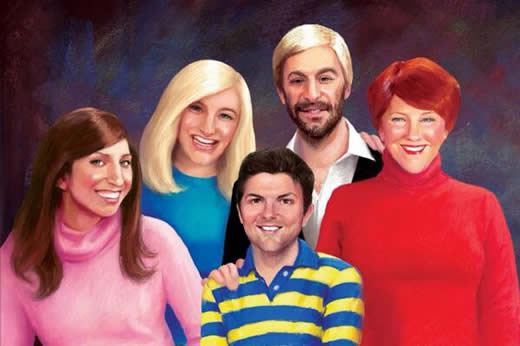 After two “failed” attempts to deliver The Greatest Event in Television History with shot for shot recreations of the openings for Simon & Simon and Hart to Hart, Adam Scott is back with another attempt, this time with a shot for shot recreation of the opening for “Too Close Too Comfort”, a ridiculously obscure 80’s sitcom starring Ted Knight.  Since the opening is so simple and short, there’s much more room in this special for bizarre behind the scenes shennanigans with Scott and co-stars Chelsea Peretti, Kathryn Hahn, Catherine O’Hara and Jon Glaser.  Unlike Hart to Hart, which is definitely the weakest with it’s one joke of Adam and Amy Poehler hating each other, mostly everyone has some strange and hilarious sub plot going on, like Jon Glaser working with stuntmen to attempt the apparently life threatening “couch flip” from the intro, Adam Scott struggling to sit in a chair, Catherine O’Hara convinced she is in Star Wars and more.  Jason Mantzoukas co-stars as the director of the special and is apparently an “action genius” and there’s cameos from Jon Hamm and Paul Scheer.  Simon & Simon is still the best but this one is a close second, check out the event below.

Everything Action Theater: The Greatest Event in Television History II