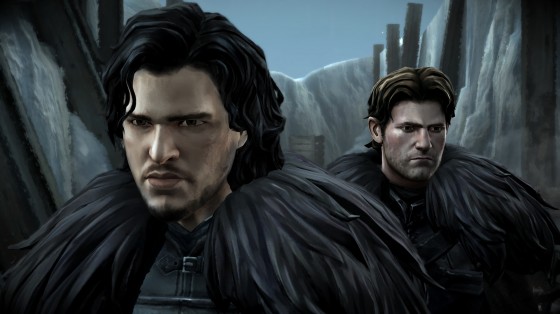 After kicking things off with a bang in Ep 1, Telltale slows things down a bit as the Forrester family’s situation becomes more and more desperate.  (If you haven’t played Ep 1, this review will contain spoilers for that episode)

I talked about the controls and feel of the game in my review of Episode 1, and nothing will change for the rest of the episodes.  Telltale has a solid design of dialogue driven scenes broken up by quicktime action sequences and, if it ain’t broke, don’t fix it.  The most novel thing you’ll be doing in this episode is directly controlling a crossbow but if you can’t hit the the targets you are told to hit, you probably should just give up on games in general.

The main thing to focus on is the story and the piece that stands out the most in this episode is the introduction of prodigal Forrester son, Asher, who left Westeros and is currently a sell sword mercenary in Yunkai.  Asher is the closest thing GoT has gotten to a Han Solo type rogue and all of his choices and sequences are just a blast to play through, especially the opening fight with some Lost Legion goons that feels like a bloodier, medieval version of the bar fight from Raiders of the Lost Ark.  The other new character you’ll take control of is the previously thought dead Rodrik Forrester, who returns to take his place as lord of Ironrath, which is currently under the thumb of the nasty Lord Whitehill.  The events in Ironrath feel like they have the most potential for things to happen, as none of the characters exist on the show and the game is free to do whatever it wants further in the series.  It’s also has the most interesting dialogue sequences, as you have to decide whether to be strong but leave your open to reprisal or submit and live to fight another day.  Ironrath also features the most emotional sequences so far, as the funeral of Lord Gregory and Ethan occurs and Rodrik reunites with his betrothed, Elana, and must try to convince her to still marry him.  The other characters, Mina and Gared Tuttle, are in King’s Landing and The Wall respectively and, while there’s potential for cool things to happen down the line, they also feel slightly less important as we know how things are going to go down in Season 3 and beyond of the show.  The trade off for that is that those two characters are the ones who will be interacting most with the actual cast members of Game of Thrones, this time featuring Natalie Dormer, Peter Dinklage and Kit Harrington.

Although it doesn’t quite have the bang of the first episode, the series continues to set up some interesting scenarios and the choices and storytelling are as strong as ever.  If you played and enjoyed Episode 1, it’s pretty much a no brainer to continue to Episode 2.