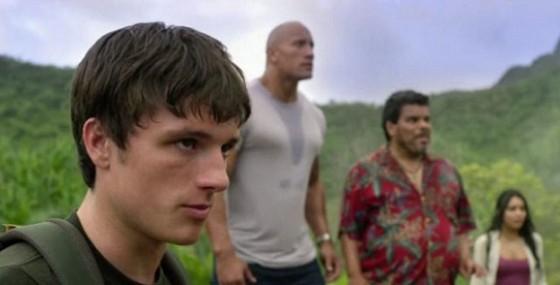 Do you remember Journey to the Center of the Earth 3D with Brendan Fraser from a couple years ago? Of course you don’t but the sequel is on it’s way to theaters next February.  Based on other Jules Verne classic, Mysterious Island finds Josh Hutcherson’s character Sean Anderson back from the first film and bringing his mom’s new boyfriend, Hank (The Rock), with him on his quest to find the titular island, where his grandfather (Michael Caine) disappeared years ago.  They hire wacky helicopter pilot Luis Guzman and his daughter(?) Vanessa Hudgens to fly them there, where a freak storm crash lands them on the island.  The island is full of giant creatures, lost cities, volcanoes to spew gold and all other manner of craziness.  The Rock is usually a welcome addition to anything but I was hoping he was back to doing more straight action instead of the like of The Tooth Fairy and that football movie.  Michale Caine seems like he’s going to hilariously insane as the explorer grandpa.  It looks like it could be an OK family adventure movie that could have some pretty good 3D  going on.  Check out the trailer below.

In The Blood Trailer