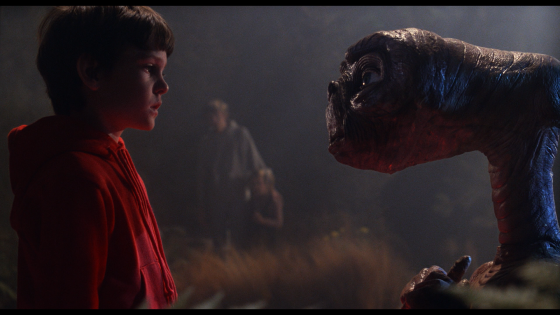 ET is one of the most beloved movies in film history and among it’s millions of fans were some pretty high profile celebs.  Michael Jackson loved the movie so much he narrated an audio version of the story and was so emotionally moved he started crying during the recording, which is still in the final version.  Another gigantic fan was Neil Diamond, who saw the movie with Carole Bayer Sager and her then husband, the legendary Burt Bacharach and they wrote the song “Heartlight” together, inspired by the warm glow of ET’s chest.  However, despite no mention of anything from the film, Diamond still had to pay MCA, the movie’s merchandiser, $25,000 to avoid a lawsuit.  The album it appeared on was also called Heartlight and the song hit #5 on the Billboard Hot 100 and was #1 for four weeks on the Adul Contemporary chart.  Because of it’s unofficial homage status, the music video for “Heartlight” doesn’t have anything ET related in it and instead just finds Neil in the studio, check it out below.