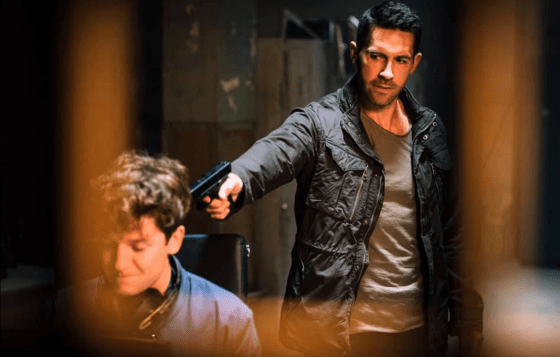 Scott Adkins is one of our most reliable action stars in recent years and he stars in the new action-thriller Legacy of Lies, which is out now on DVD, Digital and On-Demand.

Directed by Adrian Bol, Legacy of Lies has Adkins playing Martin Baxter, a former MI6 agent who leaves the secret agent life after a mission in Kiev goes wrong and his wife is killed.  12 years later, Martin and his daughter Lisa are constantly moving from city to city, with Martin trying to make ends meet with underground MMA matches and work in jobs like a bouncer at a high-end nightclub.  A young reporter, Sacha (Yuliia Sobol), finds Martin in London and reveals she knows where top-secret files that were thought lost to the Russians during the Kiev mission are; files that will reveal a sinister chemical weapons program that killed thousands of civilians.  Martin becomes caught between both a joint CIA/MI6 team and the Russians, the latter of whom kidnap his daughter and force him to bring them the files and Sacha, dead or alive.  The plot is fairly straightforward thriller stuff but there are a few interesting twists and different takes on action movie conventions.  For example, Lisa’s kidnapper, Tatyana (Anna Butkevich), is introduced in a fairly typical fashion torturing Martin with an icy demeanor but later on, it seems like she and Lisa genuinely bond, having pedicures and watching kickboxing fights.  The movie does suffer a bit from “Return of the King” syndrome, where it feels like there are at least 3 or 4 different endings and the actual ending feels like it only exists for what they thought was a shocking twist but makes no sense in the context of the movie.

Usually, you can expect solid to spectacular action from Scott Adkins and Legacy of Lies is mostly solid but it does feel like a lot of the action sequences are abbreviated or just getting started before they end.  There is a car chase and a few shootouts that feel like they could have gone on longer but end almost as quickly as they started.  Adkins does have a solid underground MMA fight toward the beginning of the movie and a solid battle with Leon Sua, who plays MI6 agent Edwards, which ends in a surprising fashion.  Nothing in the movie though really matches what we’ve seen from prior Adkins movies, especially the ones directed by Jesse V. Johnson or Isaac Florentine, and if you haven’t seen some recent classics from Adkins like Savage Dog, Triple Threat or The Debt Collector, I would recommend those above Legacy of Lies.  The movie at least looks good and it’s refreshing after seeing a lot of the recent On Demand action movies that were glaringly cheap looking that this movie actually has interesting locations and the sense that it was filmed in multiple countries for a more globe-trotting feel.

Legacy of Lies is a solid action-thriller with a decently twisty plot and some competent action sequences but it’s nothing you haven’t really seen before and especially if you’re a Scott Adkins fan, there are far better movies in his back catalog.  Compared to some recent On Demand action we’ve seen recently though, like the supremely boring Dolph Lundgren movies Hard Night Falling or The Tracker, Legacy of Lies is basically John Wick level