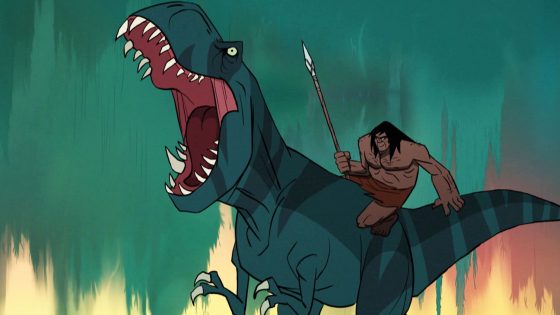 Animation master Genndy Tartakovsky’s delivered one of his most brutal but also visually stunning series with Primal last fall and now more episodes are finally on the way this coming October.  Set in a prehistoric world where it’s kill or be killed, an unlikely bond is formed between caveman Spear and female T-Rex Fang, both of whom suffered a massive personal loss.  The duo makes their way across the ancient world, battling all manner of horrifying monsters from giant bats to rivers full of snakes to vengeance-seeking mastodons.  It’s the visual storytelling Tartakovsky honed with Samurai Jack but filed down to a razor-sharp edge and it’s one of the most impressive animated shows of the last few years.  Five new episodes arrive on Adult Swim starting on October 4th and you can watch the first five episodes on HBO Max.  Check out the trailer below.

Everything Actioncast Ep 501 “The Mandalorian, Underwater, The Lion King, Mulan and More”

Primal Finally Gets a Release Date and a New Trailer

Adult Swim Gets Brutal With Primal