Hey everyone, another movie synopsis for y’all. Coming at you from the crazy year of 1989, The Exxon Valdez spilled 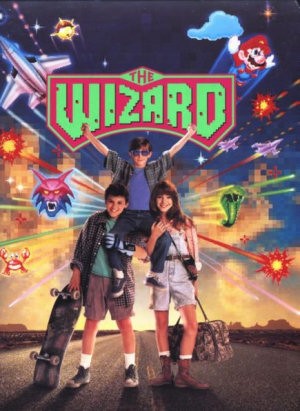 it’s oil across Alaska, The Simpsons premiered to bring joy to our lives and then would refuse to die with dignity and Disney world opened it’s doors for the first time. But perhaps more important, Fred Savage and Christian Slater would star in The Wizard, the greatest feature length commercial ever produced.

It’s the story of a young man named Corey who lives with his dad and his brother Christian Slater. They’re a little disfunctional to say the least. Corey’s little brother Jimmy, lives with his second or third mom and that guy who’s a douche in every 80’s movie. He’s “special” and is alway trying to go to California. Anyway, they stick Jimmy in a mental institute and Corey comes and busts him out. Security is kinda lax. They start hitchhiking across the country and discover that Jimmy kicks ass at arcade games. They first discover it at a bus station with Double Dragon. Oh, they’re being tracked by a bounty hunter named Tate who has terrible people skills. He apparantley tracks kids for a living.

Corey and Jimmy meet another kid, Hailey played by Jenny Lewis. They hustle her in Double Dragon and she misses her bus. She convinces Corey to go with her to Reno, where she lives with her trucker dad, and hustle people along the way. They hitch a ride in a cow truck and get robbed by the truckers. Hailey then realizes that they could take Jimmy to VIDEO ARMAGGEDON!!!!. It’s a big Nintendo gaming contest where they could win $50,000. They’ll split it 50/50 and Jimmy won’t look like a psycho.

Meanwhile Slater and Dad are trying to find Jimmy and Corey before Tate does. Tate told them that if they find them first he won’t get paid. Not the greatest strategy but moving on, Slater finds Corey’s NES in the back of the truck and Father and Son begin to bond over TMNT. Corey and gang are doing great in the hustling business until they meet the BAMF of the movie, Lucas Barton. He is considered the greatest NES player in Nevada by his posse of followers. Then magic happens, while visiting his house on an airfield Lucas shows off his skills and pulls out his secret weapon. What is it you may ask. Only the greatest controller in console history: The Power Glove!

Lucas destroys Rad Racer and Jimmy is left feeling inadequate and runs away. After a pep talk the trio continues they’re journey to Reno. When they finally arrive Hailey helps her trucker friend Spankey, the token black guy, in craps and he gives them enough money to stay at the hotel and have Jimmy play every NES game possible including Castlevania II, Mega Man, Ninja Gaiden and TMNT.

But, dun dun duh!, Tate arrives and snatches Jimmy. But, the ever resourceful Hailey yells that Tate grabbed her “breasts” and security hauls him off. The trio heads to Hailey’s fabulous trailer for the night. Tate somehow escapes security and makes it to the trailer. He hauls Jimmy off again but Hailey calls her trucker friends to block him off and beat the crap out of him. Spankey gets the trio to LA for the contest at Universal Studios. They barely make it to registration but Jimmy is in. The first round game is Ninja Gaiden. And *gasp* Lucas is there as well. He of course destroys everyone and he and his goons, of which Tobey Mcguire is one, face off with our heroes. He tells Jimmy, “I hope the wizard doesn’t wiz himself” and then heads off to prepare mentally for the next round. Jimmy rocks everyone at Ninja Gaiden and Lucas is a tad worried.

Tate, the Other Parents, Dad and Slater arrive at the contest. Lucas sells the trio out to Tate and a tense pursuit aboard the studio tour ride commences. The gang escapes by going in a device called an “elevator” which shocks Tate. Jimmy makes it onstage just in time, much to the relief of the obviously coke addicted MC. The three finalists, Lucas, Jimmy and extremely nerdy girl face their ultimate challenge. The game none of them have played, the game that the movie was made to sell, SUPER MARIO BROS. 3!!!!!!!

My god, I’m hyperventilating, but it’s so awesome though!!! The three commence to play and suck at SMB3 while the confusing contest scores go back and forth. Honestly, how is this contest scored? Jimmy gets a warp whistle and Hailey somehow knows what to do with it even though no one has seen the game before. So Jimmy triumphs and the family is brought together through the magic of video games. But, wait the sappiness is only beginning.

On the way home they stop at that dinosaur that Pee-Wee visited on his legnedary big adventure. Guess what everyone, Jimmy had a twin sister but she drowned! Shocker! Jimmy always tried to run away to get to the dinosaurs because it’s the spot where they had the last happy family picture. Now Jimmy can let go of her memory and the family can be happy and whole, Awwww. So they drive off into the sunset with their new, apparentley adopted, sister Hailey. Great, huh? One thing I have to mention is that there’s this whole over-arching story thread about how Jimmy builds with blocks all day. Guess what game Jimmy never plays, Tetris. WTF, The Wizard! Other than that the movie is 80’s and Nintendotastic! If only the people who think video games are violent could watch this movie and see the love and joy video games can bring. God bless you Teenage Mutant Ninja Turtles, your ass kicking heals in a way no therapist ever could.

Total Recall: No Retreat, No Surrender