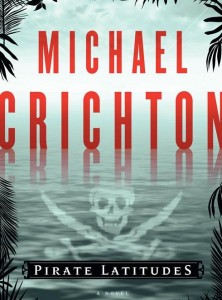 developing a movie based on the late Michael Crichton’s last book.  The book is entitled “Pirate Latitudes” and it’s sort of a realistic take on Pirates of the Caribbean.  A English captain named Edward Hunter is charged by King Charles II to attack the heavily fortified Spanish harbor of Matanceros and steal a huge shipment of gold.  Crichton is no stranger to the period action/adventure with his other works like The 13th Warrior, The Great Train Robbery and Timeline.  The book comes out in November and Spielberg will produce and possibly direct the movie adaptation.  David Koepp, who wrote the screenplays for Jurassic Park and The Lost World, is supposed to be writing the adaptation of Pirate Latitudes.  I’m definitely excited to check out the book and the movie when both come out.