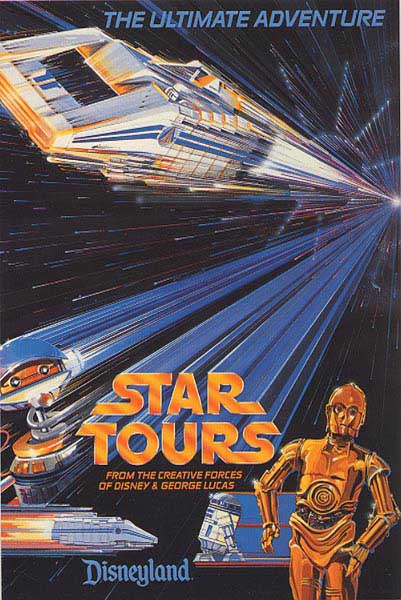 Disney had their big fan celebration this past weekend and they revealed lots of news about upcoming films and what’s happening at the parks.  One of the most exciting things was their reveal that Star Tours was getting a massive facelift and they showed off a quick teaser trailer.  If you’ve never been on Star Tours it’s a motion simulator ride that has you boarding a “Star Speeder” and taking a vacation to Endor with R2D2 and rookie droid pilot Rex.  However, when you arrive at Endor you find the Empire has built another Death Star and you help Rebel pilots blow it up.  The ride has been fairly unchanged since it opened in 1987.  Version 2.0 is going to incorporate elements from both the original and prequel trilogies and the plot is supposed to follow the  Speeder getting chased by Boba Fett.  Admiral Ackbar will supposedly communicate via hologram with the speeder as well.  Check out the teaser below for what a Star Toursesque podracing sequence could look like.  I love the old ride but it could definitely use a little technology boost. Star Tours 2.0 is scheduled to debut in 2011.

4 Star Wars comics to read this May 4th