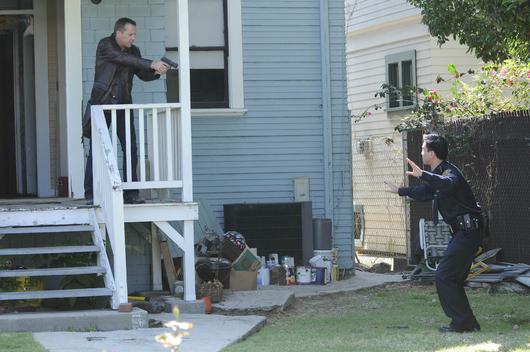 Things continued to ramp up on the final two hours of the 24 premiere.  Russian baddie Davros forced his cop buddy turned hostage to call in sick and then got suited up in his own cop uniform to take his place with his cover ID of Mike Farmer.  Meanwhile, Jack arrived where Davros was dropped off and after greasing the palms of some local basketball players, found out that he went into a nearby house.  Peeking in the window, Jack sees that Davros, of course, killed his buddy and his wife and managed to escape before Jack arrived.  After sweeping the house, Jack is trapped inside when a pair of cops come to investigate the neighbor’s claim of a disturbance.  Jack tries to head out the back and confronts the younger of the cops, telling him he’s working for CTU and there’s been a murder.  Before Jack can explain anymore, he’s hit by his one weakness, a taser, and the older and angrier of the cops thinks Jack is a cop killer and has some plans for him before taking him in.

Back at CTU, Hastings continues his interrogation of reporter Meridith Reed but she refuses to say anything.  One of CTU’s nameless agents finds a key card in her belongings, which was only issued to members of President Hassan’s family and gives access to their quarters at the UN.  Under increased pressure by Hastings, Meridith finally reveals that Hassan gave it to her because they’re having an affair.  Hastings calls chief of staff Weiss to see if Hassan can corroborate her story and, despite his brother’s protests, he does.  Chloe thinks this clears her and wants Hastings to send backup for Jack as she lost contact with him, but Hastings still isn’t convinced and there’s still the matter of the large encrypted file on Meridith’s computer, which CTU spends most of the hour trying to decrypt.

Back at the crime scene, Jack is taking a beating from the belligerent bald cop while his partner thinks they should call it in.  Bald cop tells his parnter if he can’t handle it, he should leave, which he does.  Turning back to Jack he gets slammed by Jack, who rams him in the gut with his shoulder and then slams himself onto the floor to break the chair he’s tied to.  Jack then gives some payback with a chair leg until the younger cop comes back down to stop it.  Young cop finally calls the murder in and, at Jack’s suggestion, asks what the murdered cops assignment was.

Back at CTU, Cole is heading out to coordinate the security at the UN and Dana’s ex con/ex boyfriend Kevin arrives at CTU.  Dana goes out to meet him and, for some odd reason, agrees to let him stay at her apartment for one night.

Mike Farmer/Davros arrives at the UN in time to hear Cole’s briefing and takes a call from Farhad Hassan who is slightly panicked that Hassan has told the truth about Meridith.  Davros tells him it doesn’t matter because Hassan will be dead within an hour and then arms a bomb hidden under a manhole cover.

Across town, Jack is being loaded into a cop car when the younger cop gets a call that the murdered cop was part of the UN security detail so Jack was right about it being connected.  He releases Jack agrees to help him get to the UN to stop Mike Farmer.

CTU manages to crack the encrypted file and discover that it’s schematics for a recent UN construction job and also diagrams for a large bomb that is directly under the chamber where the negotiations are being held.  Hastings issues a code red and orders a complete evacuation of the building.  Chloe is the only one not convinced but is overruled by Hastings.  Cole takes Hassan out of the building and loads him into an SUV.  He wants to know where his family is but Farhad says he’ll wait for them and get them into the next car.  Also he doesn’t want to get blown up.  Jack calls Chloe to warn her about Farmer/Davros and she patches him to Cole.  Cole decides to take things into his own hands and races out to cut off Hassan’s car, which he does but takes the brunt of the explosion himself.  Fortunately it’s an A-Team style explosion/car flip and he escapes with minor injuries.  Farther back, Farhad calls Davros and learns that the bomb failed.  Davros tells him he should run since it won’t be long until they figure out it was him who was the insider.  Farhad takes this advice to heart and runs out of the SUV, stabs a CTU agent in the neck with a pen and heads out into the night.  Cole, meanwhile, sees Davros and recognizes him as the guy who launched the rocket at the chopper earlier.  He gives chase into a nearby building but is caught by Davros.  Davros orders him to radio in and open up a hole in the southwest corner so that he can get out.  Cole radios in but tells the others that the suspect has him.  Fortunately for him, Jack arrives just in time to kill Davros and they snap some pictures of his sweet tattoos.  CTU gets them and figures out that the other men had the same tattoos and must be part of a Russian crime syndicate.  After making some calls they learn that they’re best expert is former FBI agent Renee Walker, who has followed in Jack’s footsteps perhaps a little too closely. 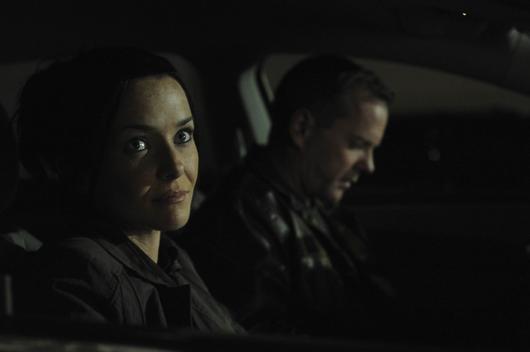 Jack and Cole arrive back at CTU and Davros’ body is brought to the morgue for an autopsy.  Jack thinks he’ll finally be able to head to the airport and starts working on his debrief.  In another part of CTU, Hassan gets a call from President Taylor, who tells him how happy she is that he’s alive and wants to know if they will be able to continue the peace agreements.  Hassan agrees since if they stopped, his brother would win.  He also lets Meridith go, realizing that things are too fragile for something like an affair.  Hassan then goes to find Cole to thank him for saving him and at the moment, a hazardous materials alarm goes off.  Davros body has traces of weapons grade uranium on it, which would have to have occured fairly recently.  Hassan thinks he knows why and tells Hastings that before the peace talks, his country was close to building a nuclear weapon but they didn’t have enough radioactive material.  Farhad was approached by a Russian who supposedly had access to old Soviet stockpiles.  Hassan refused but apparently Farhad didn’t drop it.  Hassan also deduces that the radioactive material Davros was near must be on American soil for it to remain as strongly.  Renee arrives by chopper to CTU and after an awkward elevator ride with Chloe, briefs CTU about the tattoos and the men.  It turns out she had been undercover with the Russian mob for two years when she was at the FBI and that all the men killed are part of a mysterious chapter called “Red Square”.  When Hastings learns about the radioactive material, he asks Renee to go back under and try to flush out the seller by getting into contact with her old associates and saying she has a new buyer.  At first it’s supposed to be Cole but Jack, worried about Renee’s state of mind, volunteers to go in his place.  Hastings agrees and Jack and Renee head off to meet with one of Renee’s old contacts. Dana’s bizarre side story continues when Kevin calls her from her apartment and tries to question her about Cole.  They get into a shouting match and Kevin yells at her to get back to her apartment.

Across town, Farhad meets with his Russian seller, Bazheav to finalize the sale of the radioactive material.  Bazheav says that the material is on a ship and will arrive in five hours.  Farhad wants proof it exists so Bazheav takes him to the back of his restaurant to show him his son, who is suffering from radiation poisoning.  Farhad accepts this and the two head off to finalize the deal.

Jack and Renee arrive at an auto parts store where one of Renee’s old contacts works.  She wants to get him to take her to Vladimir Laitanan, who in turn should be able to lead them to the material.  Renee goes in alone and tries to seduce her way to the information.  Her contact would love to help but he has a wrist mounted device since he’s on parole and if he goes anywhere he’s not supposed to, he’s back in prison.  Renee says she knows a way to get off and clamps his arm in a vice.  Getting a hand saw she cuts off his thumb, which pisses off Jack who says the mission is over but Renee claims she’s just warming up.

Whew, 4 hours is a lot to cover in 2 posts but we’re back to our normal time of 9pm on Mondays and The Jack Attack is going to be every Tuesday right here.