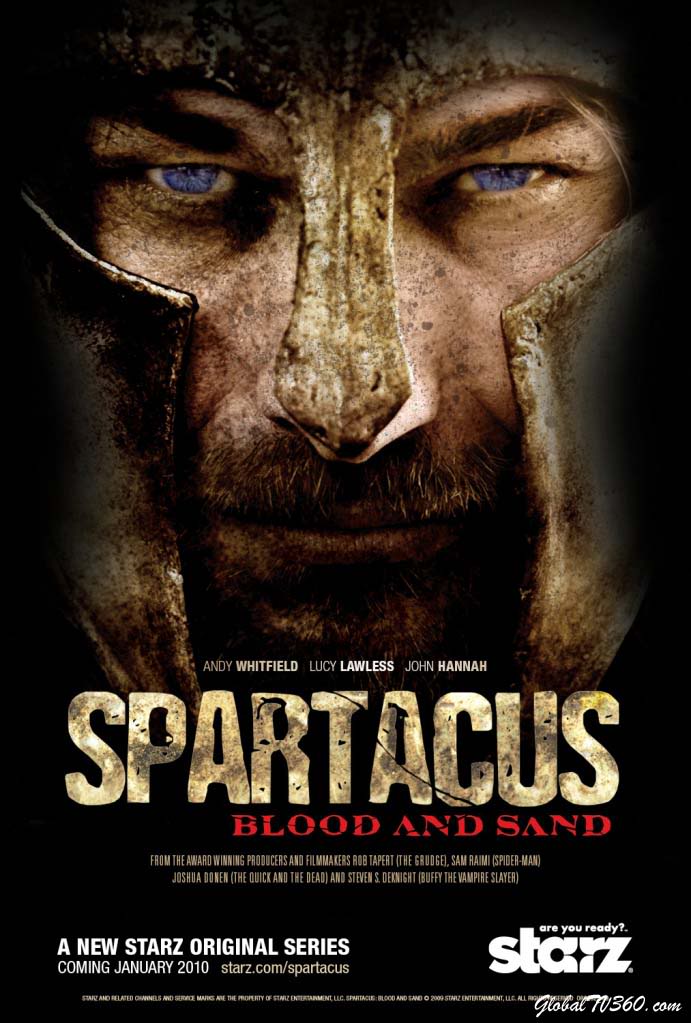 Starz has entered into the original series arena with Spartacus: Blood and Sand and it’s a stylish and fun historical epic.

There’s been a couple of different takes on Spartacus over the years, the most notable being the 1960 classic starring Kirk Douglas.  This version finds Andy Whitfield as the titular gladiator who is captured by the Romans after abandoning his position in battle to defend his wife and village after the Romans leave them open to barbarians.  He and his wife Sura are separated and now Spartacus is determined to get her back at any cost. It doesn’t really seem to be doing anything new with the Gladiator formula but it’s still interesting and you get a more in depth look at what gladiators had to go through in ancient Rome.

The show is very obviously inspired by 300 with it’s ridiculous amounts of blood, slow motion and it’s stylized look.  With the smaller budget of television however, some of the backdrops are pretty obviously green screened and it’s a little distracting.  The highlight of the show is probably the gladiator battles and they’re staged great and usually ends with limbs being cut off in a fountain of blood.

It probably goes without saying based on that last sentence that the show isn’t for the faint of heart and along with the violence there’s also tons of sexual content and language.  Rome was apparently more sex crazed and prone to cursing than sailors on shore leave.  They say it’s historically accurate in the opening of the show but they might be exaggerating just a bit.

So besides the sex and blood the show also has some good characters as well.  Andy Whitfield seems to be trying for a mix of Maximus and Leonidas as he’s pissed off and brooding.  John Hannah and Lucy Lawless are fun as an aspiring couple who own the gladiator school that Spartacus finds himself in and they try to solve their money problems and rejoin the wealthy elite of Roman society.  Craig Parker is a fantastic villain as the ambitious and arrogant Legate Claudius Glaber (he wasn’t in the third episode but hopefully he’ll be back and get his come uppance as the season goes on).  Erin Cummings plays Spartacus’ wife Sura and she doesn’t really have a lot to do but she is ridiculously hot so you don’t really notice.  My favorite character so far though is Peter Mensah’s Doctore, who is the trainer of gladiators and is never without his whip and an awesome insult (you might recognize him as the Persian messenger from 300).

Spartacus isn’t the best show on television and it’s not reinventing the wheel but it’s a bloody good time.  If you’re a fan of 300 or Gladiator you should definitely check it out on Starz or Netflix Watch Instantly.