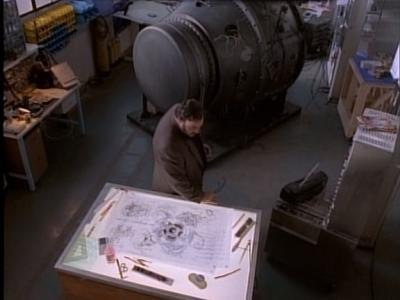 The Sliders find themselves in another dire predicament this week.  After surviving the plague ridden Earth of “Fever”, the gang finds themselves on an Earth that is about to be destroyed by an asteroid.

Normally this wouldn’t be a problem as the gang could just slide out when the timer runs out but Earth will be destroyed in 2 days while the timer has 3 days to run down.  Faced with the fact that they’re probably going to die the group splits up to confront it in their own ways with Rembrandt running off to party, Quinn and Wade trying to find their families and Arturo seeing if he can go help the local scientists but they all agree to meet back at a local electronics shop a few hours before the asteroid is supposed to hit.

Arturo heads to a press conference being conducted by Dr. Lee Antonovich, who explains that the asteroid will strike the western United States and is almost twice the size of the asteroid that killed the dinosaurs, so the devastation will be complete and total.  The press conference is interrupted by everyone’s favorite metal head/genius Conrad Bennish, who raves that Einstein was wrong about the atom bomb and that they can build it and destroy the asteroid.  He’s ignored by Dr. Antonovich but Arturo is intrigued.  Looking at Conrad’s schematics and paperwork, Arturo realizes that they could actually build an A-bomb and he and Bennish set about making it.  Using his knowledge from our Earth, Arturo reveals the key to detonating the bomb is a series of lenses that will focus the explosive shockwaves into the nuclear core.  Bennish is stoked but his attitude also worries Arturo, so he pockets a key schematic to keep Bennish from being able to replicate the bomb if and when they slide.

Rembrandt, meanwhile, heads to a local church but doesn’t find what he’s looking for, so he joins up with a group heading to a huge end of the world party.  And it’s a crazy party, with wall to wall dancing, motorcycles crashing through tables and liquor everywhere.  Rembrandt gets a chance to show off his pipes but then discovers the gang that brought him there is playing russian roulette with the home owners.  Rembrandt had made friends with the wife, Caroline, and takes her away from the party and her asshole husband, who tried to make her shoot him during his turn.  They end up helping out at the church Rembrandt went to earlier.

Quinn and Wade meanwhile discover that Wade doesn’t exist but Quinn does.  Doubly fortunate is the fact that the alternate Quinn seems to have developed sliding technology as well, however he was trying to discover time travel because he’s obsessed with dinosaurs and paleontology.  Quinn works for eight hours straight to try and get the machine running and he succeeds, but the machinery shorts out the electricity in the house, killing their chance of escaping.  Wade manages to reassure Quinn that everything will be OK and they have a romantic date in the basement.  Before things can get serious however, Arturo bursts in to cockblock Quinn with the news that the bomb is ready and being loaded onto a warhead, but he needs Quinn to double check the calculations.

Everyone arrives back at the electronics store to watch the launch of the missile, with only 16 minutes left before impact.  The missile is a huge success, blowing the asteroid into tiny pieces and everyone is ecstatic.  During the celebrating however, Arturo drops the key schematic that he was hiding from Bennish.  Bennish picks it up and then quickly becomes the biggest celebrity in the world the next morning.  The sliders are forced to slide, leaving Bennish in a position to be the most powerful person on the planet.

While not so heavy on the great setting details like Prince of Wails, this is still a pretty great episode with lots of great character moments, especially between Wade and Quinn, and I believe it’s the only episode to heavily feature Bennish, so that’s a plus as well.  Come back next week for an episode that’s really only available on DVD, “The Weaker Sex”.