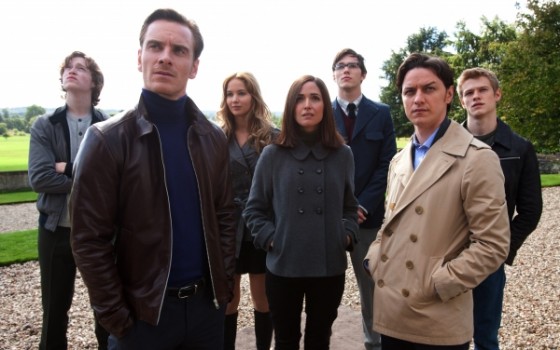 The second big superhero movie of the summer is upon us with X-Men: First Class.  After crashing and burning trying to tell the origin of everyone’s favorite mutant, Wolverine, can First Class tell a better origin about the rest of the X-Men?

The movie takes place in the early 60’s as Cold War tensions between the US and Russia are escalating, thanks in no small part to the scheming Sebastian Shaw, proprietor of The Hellfire Club.  After seeing Shaw forcing a US general to back placing nuclear missiles in Turkey, CIA agent Moira MacTaggert sees that he has a squad of mutants working for him and enlists the leading expert on mutation, Charles Xavier to build a team to stop Shaw.  Along with his “sister” Raven, Charles finds a team of young mutants and also Erik Lehnsherr, a powerful mutant with a personal reason for wanting to stop Shaw.

Michael Fassbender absolutely owns the movie as Magneto.  He is a complete bad ass from the beginning as he’s hunting down Nazis and using his magnetic powers in some really creative ways (using a ship’s anchor like some sort of sea monster, wrapping guards in barb wire, ripping out people’s fillings).  He’s also the only one, in my opinion, who keeps the character consistent so that you believe he will become the Ian McKellan Magneto of the Singer movies.  Fassbender seems like a mutant version of Jason Bourne in the early parts of the movie and on the flip side of the coin is James McAvoy as Charles Xavier, who plays Professor X as sort of a cocky, almost Austin Powersesque character.  He’s constantly trying to pick up chicks by pointing out how one of their features is actually a mutation and that it’s “groovy”.  The events of the movie force him to become the leader we know he will become in the later movies and it’s a nice bit of character growth.  The other two characters that are really good are Kevin Bacon as Sebastian Shaw, who’s sleazily evil, and Jennifer Lawrence as Mystique, who we learn is basically like a sister to Charles after he found her in his house but has to decide whether she wants to hide and be accepted by humanity or embrace her true self.  On the other end of the spectrum, January Jones is absolutely awful but at least she’s walking around in lingerie for most of the movie so you can just ignore what she’s saying.  Also, a great selection of “that guys” in this movie as well like Michael Ironside, Oliver Platt and Glenn Morshower.

Matthew Vaughn brings a great energy to the movie with some fantastic action and some creative and fun uses of everyone’s mutant powers.  There’s also a couple of really fun montages, one where Charles and Erik go to recruit the team (where one of the best cameos I’ve ever seen occurs) and the other where the team trains to hone their powers.  Some of the great set piece action sequences are Shaw and his goons raiding the CIA base where the X-Men are and the final attempt by the X-Men to defuse the Cuban Missile Crisis.  The special effects are fantastic throughout as well.

The main complaint or negetive I would say about the movie is that, if you think too much about the relationships going on, it doesn’t really make sense in the context of the Bryan Singer movies.  Charles and Mystique are basically brother and sister in this movie but if you watch X-Men or X2, the barely acknowledge each other and while Havoc and Banshee are great, where would they have disappeared to before Cyclops, Jean Grey and Storm arrived?  The Magneto/Mystique relationship is handled pretty well though.  The sub plot of Hank trying to make a “cure” serum is also kind of recycled from X3 but this movie is way better than that.

If you’re a fan of the first two movies, First Class is definitely on par with them, although I think X2 is still the best movie in the franchise.  There’s lots of great little references to the previous movies, it has fun action, great special effects, and, for the most part, some pretty great action, especially from Fassbender.  We’ll have to wait for Captain America to fully rank this year’s Marvel movies but I think Thor is just a little bit above First Class, but they are both fantastic.  DC, you have your work cut out for you.