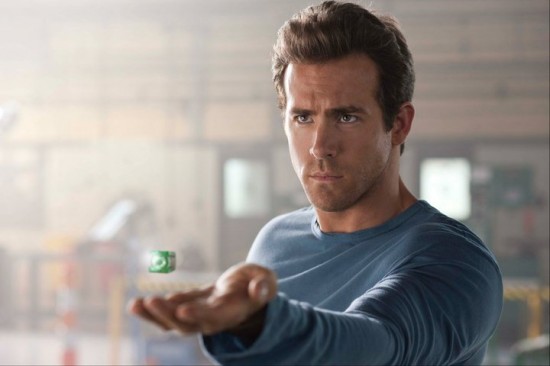 Marvel has unleashed a salvo of movies this Summer with the already released Thor and X-Men: First Class and the upcoming Captain America.  DC answers with the big screen debut of Hal Jordan aka The Green Lantern and it falls short of both the recent Marvel movies as well as DC’s previous efforts (which is basically just the Batman movies).

Green Lantern tells the origin story of Hal Jordan, a cocky test pilot who inherits a powerful ring from dying alien Abin Sur and becomes a member of the intergalactic peace keeping force known as the Green Lantern Corps.  At the same time as Hal is discovering his powers, scientist Hector Hammond is called by the US government to examine Abin Sur’s body and is infected by the essence of the evil being known as Parallax.

The main problem with the Green Lantern movie is that it feels like it’s got 2 or 3 different plots going and it focuses on the far less interesting one of Hal on Earth deciding if he can overcome his fear to become a Lantern and then fighting the increasingly deformed and evil Hector Hammond.  He’s also trying to rekindle his romance with fellow test pilot Carol Ferris, the daughter of the man who owns Ferris Air that Hal works for.  All the Hal/Carol stuff drags on and Ryan Reynolds and Blake Lively are done no favors by the script.  Lively, in particular, starts out horribly stiff but eventually gets to “OK” by the end of the movie.  She’s been good in things before so I don’t think it’s a January Jones level of horrible.  The far more interesting plot involves the story of what’s happening on the Green Lanterns homebase of Oa and Sinestro trying to mount any kind of defense against Parallax.  The best parts of the movie are Hal’s extremely quick orientation and training on Oa with Lanterns Tomar Re, Killawog and Sinestro.  All three characters are played absolutely fantastically by Geoffrey Rush, Michael Clarke Duncan and Mark Strong respectively but all to quickly Hal runs away to Earth because he doesn’t think he can hack it.  I think they should have focused completely on Oa or completely on Earth because the brief, awesome glimpses of Oa only make the Earth plot seem that much more mediocre.

There was a lot of trepidation about Ryan Reynolds playing Hal Jordan in the movie and after seeing it, I think the trepidation was warranted.  I haven’t read a ton of Green Lantern but I never got the sense that Hal Jordan was a cocky asshole like, say, Tony Stark, but that’s how Reynolds plays him and it ranges from completely unbearable to barely tolerable.  You also get the sense that Hal is perhaps bipolar because he’ll go from cracking wise to staring into the distance dramatically in between scenes.  If you haven’t been a fan of Ryan Reynolds schtick before, it’s turned up to an 11 in Green Lantern.  I did like Peter Sarsgaard very John Malkovichesque take on Hector Hammond.

On the positive side of things, the special effects in Green Lantern are, for the most part, great.  I’ve heard the suit has been a sticking point for many reviewers but I actually didn’t mind it.  It’s a little weird when you first see it but eventually I didn’t even think about it.  I also thought the three other main lanterns of Killawog, Tomar Re and Sinestro were all done fantastically well and, in the brief time they are on screen, you definitely get the sense of their different personalities (I also thought it was a neat effect that all the Lanterns had different textured suits, depending on the  characteristics of the Lantern wearing it).    Another aspect of Green Lantern that I think the movie did well was the Lantern’s ability to make “constructs”.   There are a ton of fun things that Hal and the other lantern create, ranging from flamethrowers to brick walls to a Hot Wheels style race track.  I thought the effects for Parallax were great as well.  I also saw the movie in 3D and I think the 3D worked extremely well.

If you are looking for a Green Lantern movie, I would recommend the DC animated movie Green Lantern: First Flight over this live action version of the character.  Green Lantern is not a terrible movie but I think it highlights the wrong aspects of the character and puts the fun and interesting aspects on the backburner.  If you want to see some good special effects and can stand Ryan Reynolds cocky assholeness, you might enjoy Green Lantern but I wouldn’t rush out to see it.