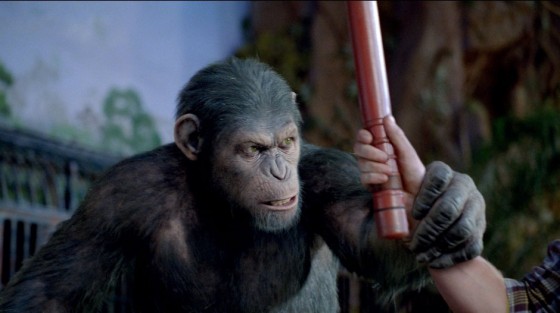 The movie follows James Franco’s character Will Rodman, a scientist at pharmaceutical company Gen-Sys, who has created a drug that could possibly cure Alzheimer’s by introducing a virus that rebuilds brain tissue.  A disastrous presentation to the board of directors leaves a test chimp named Bright Eyes dead and Will’s project rejected.  Will finds out from chimp handler Franklin that Bright Eyes had recently given birth and Will reluctantly takes the baby chimp home.  Will quickly realizes that the baby chimp has inherited the drug from his mother and is incredibly intelligent.  Will keeps the baby, names him Caesar and cares for him for the next eight years, until one day when Caesar leaps to the protection of Will’s father, who Will tested the drug on and seemingly cured of Alzheimer’s but is regressing, gets into an accident in his neighbor’s car.  Caesar is placed into a local shelter for primates and has to deal with the other apes but quickly comes up with a plan to gain their respect and escape.

Rise of the Planet of the Apes is surely going to reignite the “Can you give Oscars for completely digital performances” debate because Andy Serkis’ performance as Caesar is absolutely amazing.  The animation from WETA combined with his motion capture makes Caesar one of the most expressive CG characters ever and you truly get a sense of who he is and what he’s thinking.  The other apes are extremely well realized as well and the animation overall is superb.  An example of how great the animation is is that the apes communicate through hand motions and grunts but you know exactly what they are saying and planning to do.  Caesar commanding his “troops” on the Golden Gate Bridge is the highlight of the movie and you definitely see how Earth could be taken over by these super intelligent chimps.  As far as the human actors go, everyone is fine.  James Franco isn’t exactly the most believable genetic scientist but he’s not “Tara Reid in Alone in the Dark” bad.  Frieda Pinto is there to look pretty and suceeds, Brian Cox and Tom Felton are good as father/son douchebags in charge of the ape shelter and John Lithgow is really good as Will’s Alzheimer’s stricken father, giving lots of great looks of confusion.

The movie actually feels like three different movies and some of the parts definitely work better than others.  The first third is a sweet but slow story about Caesar growing up in Will’s house, Will meeting zoo vet Caroline and Will’s father getting cured of Alzheimer’s.  There’s a really great sequence where they bring Caesar to the Redwoods so that he can run around in the fresh air although it ends kind of bizarrely with a quick sequence of changing seasons that fast forwards time five years into the future.  The second third of the movie is essentially a prison movie where Caesar is the new kid on the block and must figure out to survive and ultimately rule the primate shelter while dealing with the evil “wardens” of Tom Felton and Brian Cox.  Caesar has to try to avoid fights, make deals, steal vital tools and all the other things you generally see in your typical prison movie.  The final third of the movie is a full out “animal rampage” movie where Caesar and his troops run amok through San Fransisco and eventually get into a standoff with police on the Golden Gate Bridge.  It’s great seeeing the apes freeing their fellow primates, utilizing broke metal fencing as spears and ultimately outwitting the cops on the bridge with superior tactics.  I think I liked the prison section the best as it was probably the most interesting character wise and plot wise but the balls to the wall finale was great as well.

I’m still a little confused about how this movie fits into the whole Apes franchise but apparently this is a complete reboot that is more connected to the original Charlton Heston series than the more recent Tim Burton reboot with Marky Mark.  There are tons of great little winks and nods to the original Planet of the Apes from names of characters to lines (Tom Felton gets to deliver two of Heston’s iconic lines) to a news report about a shuttle mission to Mars that goes missing (possibly with a certain Colonel Taylor on board?).  If this is the direction that the Apes franchise is going than I am definitely on board and director Rupert Wyatt already seems like he has some crazy ideas for a possible sequel.

Review: Dawn of the Planet of the Apes