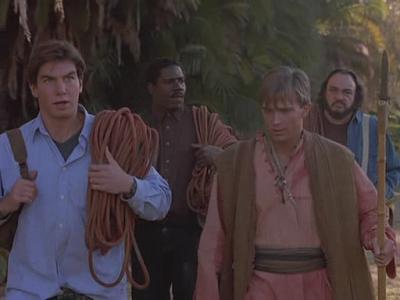 This week features the brief but extremely welcome return of the Professor as Wade and Rembrandt talk about a previous world they were on that very much resembled the future from HG Wells’ “The Time Machine”.

The episode opens with Wade waking up from a nightmare about some horrible looking creature and she tells Rembrandt about it and says it’s from a world they visited a while back with the Professor.  Rembrandt says that Wade never told him what happened to her and Quinn underground and she tells him that he never told her what happened to him and the Professor.  Cue the Wayne’s World transition noise.

The original Sliders gang arrives on Wade’s nightmare Earth and Rembrandt gets himself tangled in some thorn bushes upon landing.  Arturo helps him out but they both get scratched in the process.  The Sliders notice that there are two other Earths in the sky, along with the moon.  They will soon find out the effect this has on the Earth they’re on.  The gang hears people nearby and goes to investigate.  They find some natives in a field, cooking food and the Sliders approach, hoping to mooch some food but they are greeted by spears.  Before they can explain, the ground starts shaking and a crack opens up and one of the natives, her baby and Wade all fall into the chasm. The crack closes and the guys are panicked that Wade is now buried alive.  The natives flee and refuse to help the Sliders dig.  Realizing that they need better tools than their hands and sticks to dig, the guys head out to steal the equipment they need if the natives aren’t going to help.  They corner one of the men who seemed like he wanted to help before and find out his name is Brock and that his sister is the woman who fell into the chasm with Wade.

Brock helps the guys get some rope and leads them to what looks like a massive ventilation shaft.  Quinn heads down first and finds that there is a massive industrial area underground.  Before the others can follow, the de facto leader of the natives, Keegan, arrives and cuts Quinn’s rope and captures Arturo and Rembrandt.  Quinn finds that the facility is some sort of giant shock absorber to help counteract the constant earthquakes.  The land above was engineered by a group of brilliant scientists and engineers, who then vanished, leaving the facility to waste away and causing the earthquakes on the surface to get worse.  Quinn finds Wade’s footprints (Wade survived the fall, the other woman didn’t and Wade found that there is a group of creatures living in the facility) and finds her cornered by a group of, we may as well call them Morlocks and that a Morlock mother has the baby.  Another quake hits and Quinn takes advantage of the confusion to grab the baby and run.  They don’t get far before Quinn is hit in the head by a rock and knocked out and Wade and the baby are recaptured by the Morlocks.

Back on the surface, Rembrandt and Arturo are having horrific reactions to the thorn bush scratches they received upon arriving.  Arturo discovers some sort of red, thorny growth is starting to come out of his arm and he scratches his arms bloody until he forces Rembrandt to knock him out with a punch.  Brock sneaks in a short while later and gives them some magic water that the natives drink to keep from being sick and also to heal wounds.  He also leaves them some fruit that tastes like whatever you want.  Brock also mentions that Arturo’s reaction would have been that strong if he was ill lately and Rembrandt learns about Arturo’s fatal illness.  With Brock’s help, they escape again and Rembrandt and Brock climb down the ventilation shaft.  They make their way into the shock absorber facility and run into Wade, who stole the baby back and is on the run from the Morlocks.  Luckily Quinn finds the gang at that moment too and has turned his shirt sleeve into a sling and forces the Morlocks to retreat with some well placed rocks.  The quartet hides for a while and Quinn reveals to Wade that he wants to have a bunch of kids to make up for being an only child.  The coast seems clear so the group heads out to a staircase that seems to lead up but have to fight off one more attack by the Morlocks.  Quinn and Rembrandt manage to punch out a bunch and throw some over the railings and the group makes it back to the rope and climbs back to the surface.  They find Keegan and the rest of the natives holding Arturo at spear point but Brock convinces the group that they need to leave their valley or they’ll eventually die from the earthquakes.  Most of the group leaves with Brock and the Sliders slide out.  In typical Sliders fashion, the person who was the biggest dick to the Sliders gets some sort of horrible comeuppance and Keegan finds himself the victim of a Morlock who makes his way to the surface thanks to the still attached rope.

After a few weeks of Maggie, it’s a breath of fresh air to have Arturo back, if only for one episode.  The original group had such a great dynamic that is ruined by Maggie’s constant bitchiness.  As far as the movie/pop culture Earths go, this is one is OK.  They got performers from Cirque Du Soleil to play the Morlocks, so that’s pretty cool and they definitely take advantage of the industrial setting to jump, flip and spin their way around railings, pipes and stairs.  Basically this episode just serves to prove how horrible a decision it was to kill off Arturo.