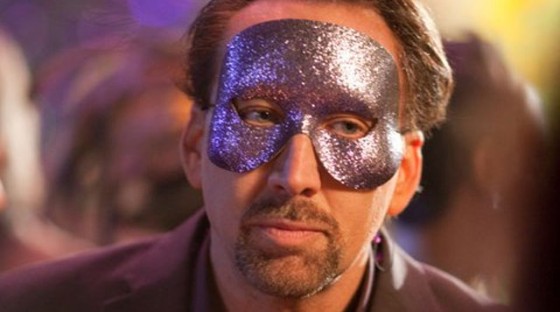 It’s always a good day here at Everything Action when we get the trailer for a new Nicolas Cage movie and today we have the trailer for “Justice”.  Cage stars as Will Gerard, a teacher whose wife, played by January Jones, is attacked and seriously injured by a carjacker.  At the hospital, Will runs into a mysterious stranger, played by Guy Pearce, who offers his group’s services to “take care” of the attacker in exchange for a favor sometime down the road.  Pearce’s group makes it look like the carjacker committed suicide but then expect Will to murder a sex offender for them.  He refuses and shit hits the fan.  It’s basically a slightly different spin on the “Strangers on a Train” plot and it looks like it could be an all right thriller.  January Jones looks like she’s actually trying to show some human emotion in this movie, which is a welcome change and Cage is going to be running around at some point in a ridiculous Mardi Gras mask (see above) so those are good signs but there’s no US release date yet.  Check out the trailer below.