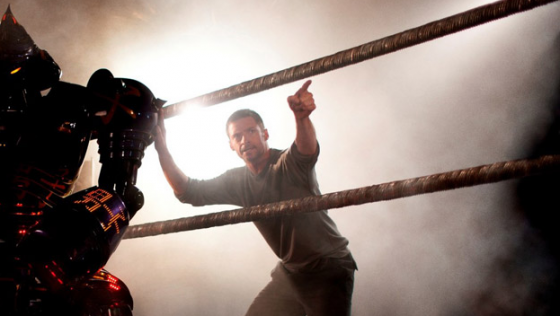 Coming out at during the usually slow and mellow pre-Oscar movie season, Real Steel feels like a summer blockbuster someone forgot to schedule.  It’s got some fantastic special effects, a great lead performance by Hugh Jackman and is tons of cheesy fun.

Jackman plays Charlie Kenton, a former up and coming boxer who has become a low level promoter in the new sport of choice, robot boxing.  Constantly running from debts and taking any odd job (like putting his robot against a bull in the opening of the movie), Charlie finds out that one of his ex-girlfriends has died and that he has custody of his 11 year old son Max.  Charlie wants nothing to do with Max but, through one of his schemes, agrees to take him on for the summer while his aunt and her husband go on vacation to Italy.  After another failure of a fight, Max and Charlie break into a junkyard and Max stumbles onto a robot named Atom who he gets functioning and demands Charlie find him a fight.

The highlight of the movie is easily the robot fighting.  From the underground fighting scene to local bars to the World Robot League championships, every venue has a distinct feel and so do the robots that compete in them.  Compared to the other big robot franchise of the moment, Transformers, the robots of Real Steel actually have distinct looks and personalities instead of just being random bits of jagged metal that a computer vomited up.  The boxing matches themselves are also incredibly well done. Also unlike the Transformers movies is that in Real Steel you can actually see the fights as opposed to watching Optimus fight Megatron while looking through Bumblebee’s armpit.  It’s classic, Rocky style movie boxing.  Rocky has been mentioned numerous times by director Shawn Levy as the main inspiration and apparently the final battle *spoilers* between Atom and the Ivan Dragoesque Zeus is actually almost a punch for punch remake of the Rocky/Drago fight from Rocky IV.  Speaking of Rocky IV connections, Zeus also has an icy Russian promoter and his creator says the very similar line of “Anything Zeus sees, he kills”

Another Stallone movie seemed to heavily influence Real Steel as well, which is Over the Top.  Both feature an estranged father and son bonding over a, some would argue stupid, sport and also driving across country in a truck.  Hugh Jackman is traveling to boxing matches instead of hauling Brut but the result is the same in that he learns to love his son and overcome all odds.  Over the Top is hilariously heavy handed in it’s messaging, becoming the poor man’s Terms of Endearment at times.  Real Steel isn’t quite that overt with it’s emotional story but it still has some groan inducing lines like, “I want you to fight for me, that’s all I’ve ever wanted!”.

Luckily for Real Steel, even with those groan inducing lines, it has Hugh Jackman to sell them.  Jackman is one of the most charming actors working and even when he’s supposed to be kind of sleazy, you still really want to like him and root for him.  Dakota Goyo, who plays Max, is one of those kid actors who is 11 but acts like he’s in his 30’s, he thinks he knows everything and talks like an adult in a kid’s body.  Back to Over the Top, Goyo is nowhere near as annoying as David Mendenhall was as Michael in that movie.  Evangeline Lilly is charming as well but she basically just acts as Jackman’s conscience for the whole movie, re-iterating the lessons he’s supposed to be learning.

My hope going into Real Steel was that it would be ridiculous fun and it more than delivers in that respect from the actually awesome robot fights to more unintentionally funny things like Charlie insisting that to give Atom more flair that Max should lead him in a hip hop dance as he makes his way to the ring (Atom has an ability to “shadow” people’s movements), to the “underground” fight scene where battles take place in biker bars, abandoned zoos and warehouses to the increasingly elaborate way that people control their bots.  One thing that was not fleshed out as much as it could have been is the fact that the movie takes place in 2027 but other than fancy new displays and glass iPhones and tablets, there isn’t really anything different besides the fact that robot boxing is the new combat sport of choice, although I guess things wouldn’t change that drastically in 8-9 years.

If you’re a fan of the Rocky movies (especially Rocky IV’s sensibilities) then Real Steel is definitely worth a look as it’s your classic underdog story with fantastic modern special effects.  Jackman is, as always,tons of fun to watch and the great fight sequences balance out the slightly cliche emotional father/son bonding story.  If you want some summer blockbuster style fun in the middle of October, Real Steel is your movie.