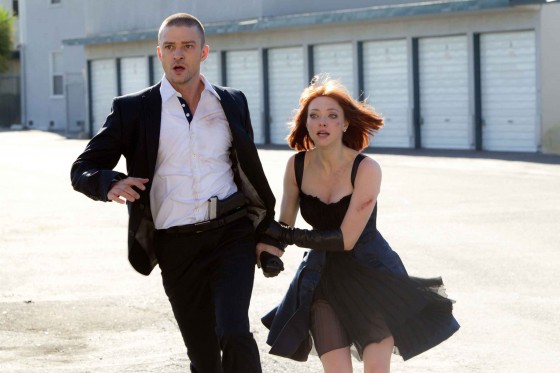 In Time is the latest from director Andrew Niccol, who previously directed the similiarly themed Gattaca, and had an interesting premise but the movie boils down to an average chase/action movie.

The premise of In Time basically boils down to that in some alternate/future world, people have been genetically engineered to only age until 25 and then have one year to live after that unless they earn more time, which is now the currency of this society.  Theoretically if you were rich enough, you could basically live forever.  Justin Timberlake stars as Will Salas, who lives in the extremely poor Section 12 of the unnamed future city the movie takes place in.  He dreams of one day making enough time to move himself and his mom (Olivia Wilde) to the rich section of New Greenwich.  He ultimately stumbles into a way to do this but in the process becomes the target of a ruthless “Time Keeper” (Cillian Murphy), whose job is to regulate where the city’s time is, specifically, keeping it in the hands of the rich.

The premise of In Time is an interesting one but one of the main problems is that there isn’t enough world building.  There’s an extremely brief opening voice over to explain the gist of the world and over the course of the movie you see a couple touches like what a bank would be like in this world and the various ways time can be transfered (through a metal box device or by grabbing someone’s arm) but there is no explanation about how any of it works.  Transferring time by physically grabbing their arm for instance, how are you able to accurately trade time?  Is it a mental process or is it started by twisting the arm of the other person?  One aspect they do do a good job of showing is how society’s outlook on age would change drastically if everyone froze at age 25.  A character at one point makes the joke that how do you tell if a woman with a man is his mother, wife or daughter?  Other movies in this vein like Equilibrium and even Daybreakers does a better job of showing what their world are like with their alternate universe premises.

Acting wise, I think Justin Timberlake could be a decent action star but this movie doesn’t really play to his strengths.  His character is way too serious for someone as funny as Timberlake.  I can see him in the future as a sort of John McClane or Nathan Drake character, in terms of constantly dropping one liners and quips.  One of the funner parts of In Time is that it’s a fun guessing game about which young actor is going to show up next.  Various people drop in and out like White Collar’s Matt Bomer, The Big Bang Theory’s Jonathan Galecki, and Mad Men’s Vincent Kartheiser (who will forever be Pete Campbell) and a surprisingly fun Alex Pettyfer as a time stealing gangster.  Cillian Murphy probably gives the best performance as Time Keeper Raymond Leon, a “veteran” of 50 years who is relentless in his hunt of Will.

In terms of action, there’s nothing that you haven’t seen before with the requisite car and foot chases being the main action pieces.  With literal clocks ticking down on people, there is a little bit of added tension.  The movie tries to become a sort of future Bonnie & Clyde about halfway through but there’s only one heist scene and Amanda Seyfried and Justin Timberlake aren’t given any fun lines or have that great of chemistry to really be comparable to that classic.  The end also has an extremely convenient deus ex machina that you’ll either go with or groan at depending on how invested you are in the movie.

In Time is an average but still fun action movie with an interesting premise that it, unfortunately, doesn’t capitalize on to it’s fullest.  If you’re a fan of some of other movies I’ve mentioned with similar premises, I would say this one is worth a rent but you definitely don’t need to rush out to the theater to see it.