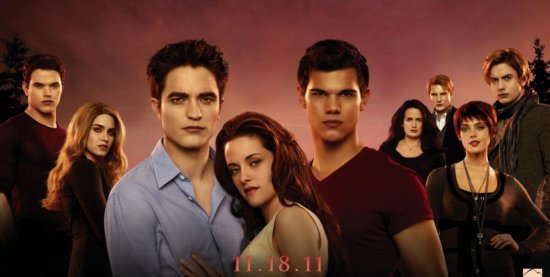 Breaking Dawn Part 1 remained at the top of the box office over the holiday weekend, despite a 69% drop off from the previous weekend.  For the weekend, Twilight made another $41.7 million, bringing it’s total gross to over $220 million. In actually good new, The Muppets had a triumphant return to theaters as they had a strong second place debut with $29.2 million.  Adjusting for inflation, only the original The Muppet Movie beats this new entry in terms of box office.  Happy Feet Two moved down to third place with $13.4 million while the two other new releases, Arthur Christmas and Hugo rounded out the top five.  Arthur Christmas, with it’s $12 million opening was actually the lowest for Aardman Animation, even lower than the completely forgotten Flushed Away but analysts think that it’s specific tie in to Christmas should make it have a steady gross week to week.  Hugo was actually the third highest opening for Martin Scorsese, behind The Departed and Shutter Island, with $11 million.  Everything else slid down a number of spots to accommodate the new releases with Tower Heist falling the farthest from sixth to barely tenth.  The other mover was George Clooney’s The Descendants, which gained some more theaters and moved up to ninth with $7.3 million.  There’s no wide release movies this coming weekend so Twilight will probably remain on top for at least one more week.