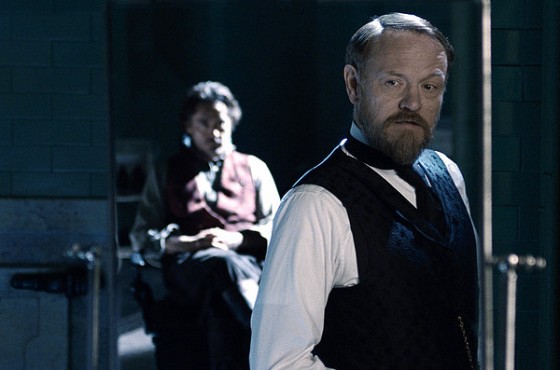 2009’s Sherlock Holmes reboot was generally well received, thanks in large part to the charming pairing of Robert Downey Jr. and Jude Law and stylish and gritty action, courtesy of Guy Ritchie.  All of that is still in play for A Game of Shadows and it doesn’t really improve on the first one but it’s still a fun ride.

Robert Downey Jr.’s Sherlock Holmes is in pursuit of criminal mastermind, Professor James Moriarty (played by Jared Harris), who has been acting on a plan that could change all of Europe forever if successful.  Holmes drags a reluctant Dr. Watson into the plot, despite the fact that Watson is getting married and the duo goes in search of a gypsy fortune teller (Noomi Rapace), who’s brother seems to be a key part of Moriarty’s plan.

Holmes is even more eccentric in A Game of Shadows than he was in the first movie from turning his flat into a rainforest with turkeys and goats runnning around to developing “urban camouflage”, which is designed to match bookcases and chairs and make Holmes invisible.  It’s probably a little too crazy at times but as the movie goes on Holmes laser sharp observation and intellect take precedence.  Jude Law is still a great foil as Dr. Watson, constantly exasperated by Holmes’ antics but always has the detective’s back.  Watson also gets a chance to use the observation skills he’s picked up from Holmes in a couple of scenes.  Jared Harris is fantastic as Moriarty, outwardly incredibly charming but you can tell that just under the surface is something sinister.  The scenes between Holmes and Moriarty where they dance around their conflict and trade accusations and threats are some of the best scenes in the movie, especially their final exchange where they are not only revealing faults with each other’s plots but mentally playing chess as well.  Finally, Noomi Rapace is good as well, able to hold her own where the action is concerned but is kind of flat, emotionally.

One of the trademarks of the first Holmes was the use of slow motion during the fights and action scenes and there’s even more of it in A Game of Shadows, maybe too much at times.  The gimmick of seeing Holmes predict how the fights will go in slow motion and then seeing it in real time is still pretty cool and I appreciate the fact that the movie switches it up as well.  There’s a fight early on where Holmes is fighting a Cossack assassin and predicts at least 10 different strikes to perform but when we get back to real time, Noomi Rapace’s Sim takes the assassin out after Holmes’ first hit with a trio of knives.  We even get to see Moriarty’s version of the slow motion predicting toward the end.  The one scene where the slow motion is probably a bit much is the one you’ve probably seen from the trailer where the group is trying to escape a volley of mortars in a forest.  Not only does it go into slow motion for most of the scene but it eventually goes into super slow motion.  To paraphrase Jeff Winger from the recent Christmas episode of Community, “You eventually reach a point of diminishing returns on the slow motion.”

If you’re a fan of the first Sherlock Holmes, you’ll probably enjoy A Game of Shadows as it features everything you loved about the first one, just more of it from Holmes’ eccentricity to stylish fight scenes to a twisty mystery that is unraveled in classic Holmes fashion (meaning all at once in a breathless explanation by Holmes).  If you’re a fan of Holmes in general, you will also appreciate the setting of the climactic battle between Holmes and Moriarty.  I think the first Holmes is probably a little bit better as it had a slightly brisker pace than A Game of Shadows but it’s definitely a good choice if you’re heading to the theater this Christmas week.