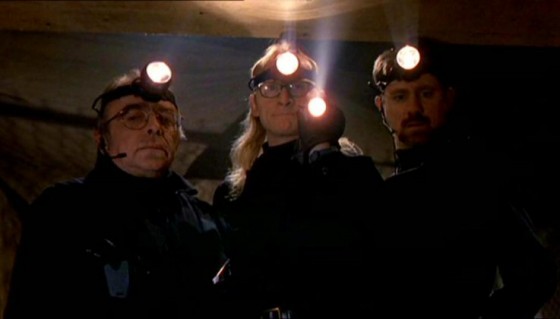 The episode kicks off with Jimmy giving a speech about heroes and we get a brief glimpse into the childhoods of the Gunmen; Byers tells his class that he wants to be a mid-level bureaucrat, Langley gets yelled at by his dad for playing on the computer instead of milking cows and Frohike forces the captain of the football team to admit that the Cutlass is the best car and claims he’s going to be a publishing visionary, like Hugh Hefner.

Back in the present (of 2001), Byers heads to the Freedom of Information office because one of his many, many requests for files has been granted.  The clerk gives Byers a massive box which Byers is confident is every file he’s ever requested but turns out to be a cinder block.  Frohike tells Jimmy to throw it out but Jimmy finds a single piece of paper in the bottom of the box.  Frohike tells him it’s junk and for Jimmy to shred it and Jimmy starts chuckling about how goofy the guy’s name on the file is, Stan Mizer, which catches Frohike’s ear and causes him to lunge for the power cord to shut off the paper shredder but he’s unable to catch it in time.  Fortunately, the guys have some advanced document reconstruction software are able to get a pallet number and an initial from the document.  Frohike explains that Stan Mizer invented the world’s first and only water powered car, which disappeared sometime in the 60’s after Mizer’s death. The guys figure that this document is proof the car is still out there and they head out to investigate. At the same time, Yves is working for shady oil industry employee Henry Farst, who is attempting to find the car as well.

Frohike and Byers head to the home of Mizer’s daughter, Shelly, who chased Frohike off in the mid 80’s when he tried to investigate the car.  Frohike mistakenly thinks the mailman is going to kill them and forces himself and Byers inside Shelly’s house.  She is understandably pissed but the guys manage to convince her to let them sort through Stan’s files.  They rummage through the basement and Frohike finds a childhood painting that Shelly painted of the car on what turns out to be a photograph of Stan and his best friend, J.T. Guthrie.  J.T. is the initials the guys discovered on the file.

Meanwhile, Langley and Jimmy stay back at HQ to try and track down the pallet numbers from the document but are unable to find anything when Langley notices that the file doesn’t have an FOI office stamp on it, which means someone planted it in their box.  They go to question the FOI clerk but find him murdered by Farst but evidence points to Yves as the killer.  Frohike, Byers and Shelly pick up Langley and Jimmy and the group heads out following their new J.T. lead but the Gunmen’s VW bus blows a tire and, much to the guys chagrin, left their jack at home in favor of night vision goggles.  Jimmy, in a rare moment of brilliance, thinks that if they can leverage the bus up with himself and a log, they can change the tire.  Jimmy puts his plan into action but accidentally flips the bus completely over and into a water filled ditch on the side of the road.  The group gets towed to the nearest farm, which luckily is the Guthrie farm and Jimmy and Langley are shocked when the current owner comes out and asks them if they are here for J.T.  The guys answer in the affirmative and the farmer takes them into the barn to meet “J.T.”, his prized bull who is scheduled for a rectal exam.  Langley is forced to face his hatred of cows by jamming his whole arm into J.T. and the farmer quickly catches on that they aren’t vets. Luckily, the rest of the group arrives and Shelly recognizes the farmer as Jason Guthrie, the son of J.T. and her childhood friend.

Jason tells the guys that his father used to work at the nearby Biznot Air Force base and the guys send Jimmy in to break in and try to find any information about Mizer and manages to find the original, unredacted file but gets into a fight with a base MP that turns out to be Yves in disguise.  The file gets ripped in half and Yves reluctantly agrees to help the guys, since there’s enough money in it for everyone.  The full file lets the guys know that something weighing about the size of the water powered car was stored at the base but then transfered to a storage unit at the bottom of a nearby nuclear missile silo.  The guys decide to investigate the next day but, unfortunately, Farst shows up having been tipped off by Jason, who accepts a bribe check.

Frohike frantically wakes the guys up the next morning due to the fact that the silos are scheduled to be demolished that afternoon.  Jimmy and Yves provide lookout while the guys rappel into the silo and search for the storage room.  Yves spots Farst driving away with the water powered Studebaker Lark, which Jason must have helped him get earlier. The guys discover another cinder block where the car used to be and are seemingly blown up when the silos are demolished.

Jimmy desperately works for hours to try and dig into the silo despite Yves’ arguments that there’s nothing he can do.  Both of them are happily surprised to find the guys walking toward them, having escaped through a ventilation shaft that dumped them out a half mile down the road.  Heading back to the Guthrie farm, Jason reveals that he couldn’t cash the check because of his guilt and Shelly, after seeing the dedication of the Gunmen, reveals that the car, at least the engine and frame of it, are in Jason’s barn.  Everyone goes to check it out and are cornered by Farst, who plans to kill them all and introduce the water powered car to the world for a tidy profit.  Jimmy acts quick and pulls J.T.’s “udder”, causing him to smash Farst through the barn wall.  Farst is carted off to the hospital and the guys celebrate by getting the car running  and Frohike takes her for a victory lap.

Next time the guys are reluctant babysitters when they find an abandoned baby while investigating a candidate for Senate.