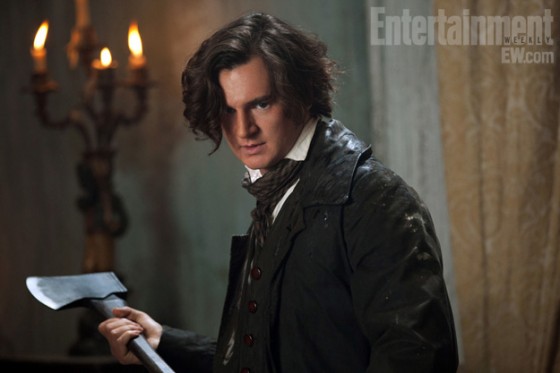 Abraham Lincoln, one of the greatest, if not the greatest, presidents in American history and, as such, has built up a mythical stature in history.  Many different takes on the Great Emancipator have been done in different mediums, from Space Lincoln in Star Trek to Time Lincoln from the comic of the same name and recently there was Abe Lincoln: Vampire Hunter from Seth Grahme-Smith, author of Pride and Prejudice and Zombies and Sense and Sensibility and Sea Monsters.  The book is set up as the lost memoirs of Lincoln, as he describes his secret war against vampires during the Civil War.  Vampires also murdered Lincoln’s family.  The movie version has had a bit of trouble with directors and actors signing on and dropping off but Wanted director, Timur Bekmambetov and Tim Burton are bringing the book to the big screen this summer.  Benjamin Walker stars as Lincoln and the movie co-stars Dominic Cooper, Mary Elizabeth Winstead, Rufus Sewell and Anthony Mackie.  The movie looks like it has the super stylized action that Bekmambetov has become known for and just the novelty of Abe Lincoln murdering vampires with a hatchet should hopefully make it a fun movie.  Check out the trailer below and the movie is out in June.