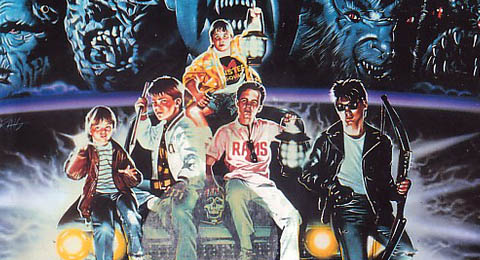 Fun Fact: Michael Sembello originally wrote his biggest hit, “Maniac” for a horror movie but it was reworked to be included in Flashdance.  Sembello got another shot at the horror genre, sort of, by having his song “Rock Until You Drop” included as the gearing up montage song for the beloved cult classic, The Monster Squad.  At the point the montage kicks in, the Squad has learned that, since they have stolen an amulet from Dracula, that they can defeat him once and for by performing an incantation at a local church.  Unfortunately, Dracula has called upon his fellow classic monsters like The Wolfman, The Mummy and Gillman to assist him so the Squad has to gather supplies to fight them off.  That means making stakes and silver bullets in shop class, stealing archery sets and sending their faithful beagle off to get the help of the Army.  It’s everything an 80’s montage should be and you can check it out below.

Movie of the Month: The Monster Squad