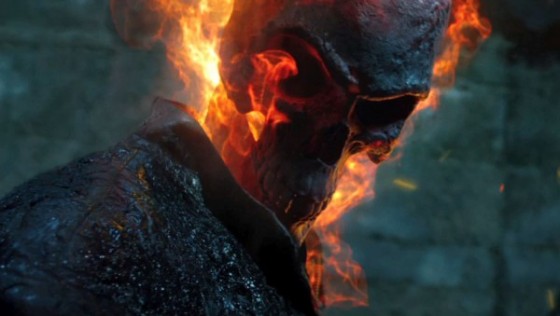 The first Ghost Rider movie could be summed up in one word: lame.  The special effects were terrible, the villain was like a rejected Twilight villain and Nicolas Cage seemed bored out of his mind.  Marvel seemed to realize this and decided to do a pseudo reboot with Nicolas Cage still starring as Johnny Blaze but with Crank directing team Neveldine/Taylor behind the camera.  The result is like the franchise got a full syringe of adrenaline injected into it.

The movie picks up an indeterminate time after the first film (sort of recapped in a hilarious voice over/graphic novel style by Nicolas Cage) with Johnny Blaze ending up in Eastern Europe, trying to control the Ghost Rider spirit inside him.  He’s recruited by a drunken French priest (Idris Elba) to help him find and protect a young boy, Danny, who is the son of Satan (or Roarke as he’s calling himself in this movie) before Roarke can perform a ritual and transfer himself into Danny and bring Hell to Earth.  If you’re familiar with the comics, it’s probably the most basic Ghost Rider plot you can do and the plot is really just a means to get you to the insane action sequences.

Right off the bat, the movie kicks it into high gear as within five minutes there’s a massive commando raid against a monastery and Idris Elba is flying off the side of cliff firing a machine gun.  The Neveldine/Taylor action style is in full effect with seizure inducing quick cuts, crazy zooms, slow motion, etc.  All the action involving Ghost Rider is pretty fantastic as well and they utilize all the aspects of Ghost Rider’s powers.  Guys are incinerated left and right and the Rider’s invulnerability is put to the test as he’s shot with rockets, machine guns, grenades and more.  The one thing that isn’t as fully realized as it could have been is one of  the Rider’s key powers, the Penance Stare.  The Rider just sort of awkwardly holds people’s heads and stares at them until they turn to ash.  The original movie might actually trump this one as they at least had a crazy visual of the criminal’s sins swirling around and then their eyes turned to charcoal.  One aspect of the Ghost Rider’s powers that the movie nails is the fact that every vehicle he enters turns into a demonic version.  You’ve seen his motorcycle but Spirit of Vengeance also features a massive crane/combine and a truck.  The crane in particular is a “oh shit” moment as Ghost Rider decimates an entire army of goons.  The final car chase that you’ve probably seen snippets of in the trailer is fantastic as well.

If you’re a fan of Nicolas Cage’s “Nicolas Cageness” then you owe it to yourself to check out Spirit of Vengeance.  This is the Nic Cage everyone wants to see when they watch a Nicolas Cage movie with numerous freak outs, strange quirks and flairs, ridiculous one liners, etc.  You can almost hear Neveldine/Taylor yelling at him to go even bigger and crazier.  Cage also brings a lot more personality to the Ghost Rider, making him much more menacing but also with a dark sense of humor.  He almost has like wrestling style celebrations after defeating whatever group of thugs he just incinerated.  Speaking of the Rider, I think it probably goes without saying that the special effects are about a million times better than the original movie.  Besides the Rider having more personality than just being a skull floating flames, his look is completely changed to make him more bad ass and threatening looking.  I love the little details like the Rider’s jacket and pants bubbling and melting because of his hellfire.  Idris Elba is also super fun as the drunken priest Moreau, with a fantastically bad French accent and acting completely different from things you’ve probably seen him in before, like Luther or The Wire.  Ciaran Hinds plays Roarke/Satan and he snarls and chews the scenery for the whole movie and seems to be able to portray the decaying of his current body just by facial expressions.  The other villain of the movie is Johnny Whitworth as Carrigan, a gun for hire who is hired by Roarke to kidnap Danny.  Carrigan is “killed” by the Ghost Rider about halfway through the movie but Roarke brings him back and endows him with some pretty awesome decaying powers, anything he touches rots and breaks down.  The effects for the decay are awesome and it’s fun to see the various things he touches break down. Christopher Lambert even shows up as a creepy monk.  The two roles that aren’t really up to snuff are Danny and his mother, Nadya.  They both aren’t very good and they have to be the emotional center of the movie.  Neveldine/Taylor’s strong suit is definitely not emotional moments, the scenes between action sequences are basically just to reveal more of the plot and get to the next action sequence.   Violente Placido, who plays Nadya, is like the poor man’s Olga Kurylenko; which is not the best place to start out at.    Fortunately, there’s usually some crazy action sequence or Nic Cage freakout right around the corner to distract you.