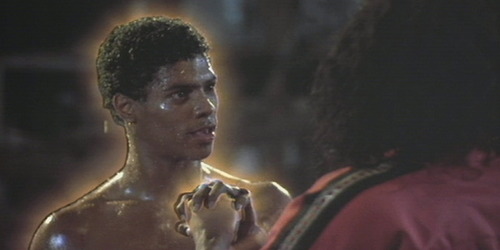 A cult classic of the highest order, The Last Dragon is the story of Harlem martial arts master “Bruce” Leroy Green as he attempts to attain the final level of his training and gain the mystical “glow” that all the martial arts masters give off.  On his quest, he gets on the wrong side of self appointed Shogun of Harlem, Sho’Nuff and evil arcade/record producer, Eddie Arkadian.  You’ll sometime see the full title of the movie as Berry Gordy’s The Last Dragon and that extra name is important because Gordy is the founder of Motown Records and used the movie to highlight some of his up and coming talent like El Delbarge and Prince protege, Vanity, who co-stars in the movie.  Check out some of the musical highlights below and if you’ve never seen The Last Dragon, stop what you’re doing, grab some beers and check it out.

“The Glow” by Willie Hutch

“Rhythm of the Night” by El Debarge

“The Last Dragon” by Dwight David