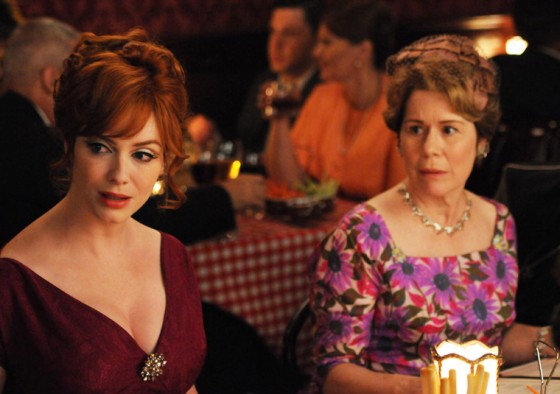 Last week I talked in detail about Betty Francis, Don’s ex-wife who was the focus of the previous episode and also the most reviled character on the show. While writing I racked my brain thinking of other irritating characters, but I wasn’t able to think of anything that was comparable.

Then Joan’s douche-nozzle of a husband appeared in this episode.

There’s a lot of fuel behind the hatred of Greg Harris. The first being that Joan herself is an independent and bossy woman. Why would marriage and family life be appealing or right for her? Also, Greg himself is a controlling bastard. Oh, and then there was that time he raped her during an argument.

So when the big Army man returned to a hero’s welcome in the episode, fans were flashing back to the discontent in the past season. But everything seemed to be all smiles. Greg was back for a few days, then back to the army for 40 days and then back for good. Happily ever after.

But that doesn’t seem to be the case. Greg breaks the bad news that he has to go back for another year, and Joan, who is tired of child-rearing, her mother’s advice and fighting the itch to go back to work, isn’t having it. But Greg tries to console her that he still has work to do and that he had no say.

It’s during a family dinner at a restaurant that the truth comes out. Greg’s mother lets the cat out of the bag that Greg volunteered to go back. This of course only concerns Joan more: that her husband is putting the war ahead of his own family. Since Joan is the strong woman that she is, it isn’t long before she delivers an ultimatum. Stay for your family or leave and it’s over. He leaves. She announces it’s over.

Joan’s household dilemma isn’t the only issue highlighted in this episode. In the opening scene, we are treated to the Drapers entering the elevator on their way to work. Don is fighting a nasty cold, so Megan stands on the opposite side. A woman named Andrea enters, another one of Don’s past flings. All these women approaching Don flirtingly is bothering Megan, who wants to make sure that his sexual instinct has been tied down for good. He assures her.

Following a meeting with Mohawk that results in Don chewing out Ginsburg, Don heads home to finally get some rest and try to get over his cold. Only he is awakened to a knock on the door. It’s Andrea, who bribed the doorman and wants to have a quick thing with Don. Normally, this is where Mr. Draper would be all over it, but as I’ve mentioned before, he seems to be a changed man. And he fights her off only to have her come back. This is where he finally gives in. After the passion, Andrea states that she’ll be come back again and again because he can’t help it. And in one of the strangest scenes of the entire series, Don strangles and kills her, pushing her under his bed with only her leg sticking out. Has our main character finally gone completely mad?

Not so. Megan returns later, which turns out to be the next morning. There’s no dead body, no sex, no nothing. Just a cold-fueled dream. Even so, it tends to still worry Don. Is the faux sex a sign of his infidelity coming back? Or is the “death” a symbol of it being over? It may have only been a dream, but it’s raised more questions than answers.

Joan and Don’s issues dominate this episode. We are also treated to some bonding between new African-American secretary Dawn and Peggy. Peggy laments how she acts too much like a man, and that she has to in order to make a name for herself. Another plot features Sally Draper and Henry’s mother Pauline butting heads but ultimately bonding. These plots both shed some light on Peggy and Sally. It’ll be interesting to see where they might go.

BAMF: Peggy, who practically extorts Roger to get the Mohawk project done. We’ll forgive her small bout of racism that occurred later.

Maddest Man: Joan, who is understandably in a huff over her husband’s decision. Good riddance to him.

MIA: Lane. Although his role seems to be more and more like “oh, that British guy” lately.

Consult Your Local Library: Much of the episode focuses on the Richard Speck murders. Grisly stuff.

Have a Seat: “The Other Woman”