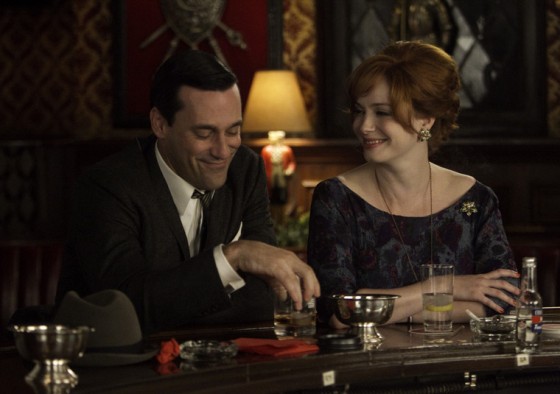 Do we ever truly get what we want?

If you continue to look at the characters on “Mad Men”, the answer is a resounding… not really. Case in point: Don Draper found the love of his life in Megan, but their relationship has been strained this season.

The secondary characters haven’t faired as well. Pete Campbell unsuccessfully tried to start a tryst with his confidant Howard Dawes’ wife only to have it end as soon as it started. And early this season, we saw Joan happy to have her husband back only to have his lie about returning to war ultimately end their relationship.

The reality hits Joan early in this week’s episode as she’s served with divorce papers from Greg. She takes her frustration out on the brain-dead receptionist before Don cools her jets with a Jaguar test drive (yep, SCDP is back in the running again) and a hearty time at the ‘ol watering hole. The two bond as they lament on the struggles of maintaining a successful marriage.

“The only sin she committed is familiarity” Joan says passively, which speaks volumes on what some people find to be the issue with marriage in the first place. The fact that it’s a double edged sword. How long can you be together with someone before they might get boring or too familiar? Don understands, and the point is driven home when returns home drunk to a furious Megan.

Last week we saw Don in a power struggle at work that also became a metaphor to changes in generations. This week it’s back to holy matrimony. Don obliges to his angry wife’s demands, but must know that his days of being free and clear are over. But is that truly what he wants?

Meanwhile, Harry Crane finally met up with an old “Mad Men” favorite: the ultra-liberal Paul Kinsey. Kinsey, who didn’t follow Crane and co. to the new agency a few years ago, bounced from ad place to ad place before becoming a devout Hare Krishna. Harry is super reluctant of Kinsey’s new world but ultimately finds out it isn’t half-bad. Kinsey passes on his Star Trek fan fiction, but an angry Lakshmi (who Kinsey took under his wing) threatens Harry not to let him leave the movement. Harry meets up with Kinsey, not with success regarding his script, but with bus fare to L.A. to try out his writing gig for real. Harry does him a solid here.

There was also another plot regarding Lane and tax fraud (?) and forging checks but thankfully, it didn’t dominate this episode as much as those two excellent sub-plots. Seeing Don and Joan connect closer here was a real treat, and as much as fans salivate over them hooking up, I simply love them like this: two soldiers sharing drinks and stories about the “good ‘ol war”. Don and Joan have faced their share of trouble, but as they stick together as we’ve seen tonight, they know they can tough it out.

Maddest Man: Joan freaked out, but Lane was sweating bullets all episode until his plan was executed to near-perfection.

Hey, it’s That… Nevermind…: Anna Wood, who plays Lakshmi, is a dead ringer for “How I Met Your Mother”‘s Cobie Smulders… or is it just me?

Up to Speed: Mad Men Season 6

Have a Seat: “A Little Kiss”