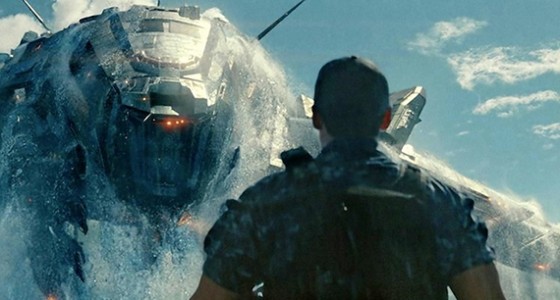 Hasbro lucked into a money making machine with the Transformers franchise and is trying to find what will be their next big movie series.  If the box office and critical response are any indication, Battleship is definitely not it.

The movie follows Taylor Kitsch as Alex Hopper, a lazy troublemaker who is forced into the Navy by his older brother and becomes a Weapons officer for a destroyer.  The fleet is scheduled to compete in the annual(?) RIMPAC war games with allied Asian countries like Japan when they run across some submerged alien ships and Kitsch’s ship and two other are trapped in an energy bubble with hostile alien ships.  Meanwhile, Brooklyn Decker, playing Kitsch’s fiance Samantha Shane, gets caught up in an alien assault team’s attempt to take over the island’s deep space satellite station to send a message, and probably invasion order, to their home planet.

Even by the standards set by movies like Transformers, Battleship is incredibly stupid.  The aliens supposedly come from a planet that is almost a clone of Earth but then have to wear protective armor and are unable to handle the sunlight.  It seems like the people behind the movie spent all the time rendering all the ridiculously complicated alien technology and no time on giving them an actual reason to invade Earth.  Speaking of which, it’s not even that big of an invasion.  If you were expecting a sort of Independence Day global threat, you will be sorely disappointed as the movie features four alien ships and a squad of alien soldiers.  The aliens also have this weird “threat assesment” behavior where they seem to only attack things that are attacking them but then a few scenes later will attack something for no reason, like inanimate highway support pillars.  The movie also takes what seems like forever to introduce the aliens as it spends the first 45 minutes or so doing half assed Michael Bay style “character development” which involves things like  Taylor Kitsch drunkenly attempting to steal a chicken burrito from a closed convenience store for Brooklyn Decker, who is apparently charmed by breaking and entering and men who get tased right in front of them, and also a soccer game between the US and Japan for some reason.

Acting wise, everyone is, with the obvious exception of Liam Neeson, in a range from tolerable to bad.  No one really stands out as being particularly horrible but no one is good either.  Taylor Kitsch comes off more like a douchebag than a hero, Brooklyn Decker is at least super attractive and Rihanna, is not terrible but falls into the cliche, “tough girl” role that would usually be portrayed by Michelle Rodriguez.

There are a couple of fun action sequences, like when the group finally gets on board the titular Battleship, the USS Missouri and gets a group of WWII vets to help them get her battle ready and launched for a final attack on the aliens which has some good “America, Fuck Yeah!” moments when big guns are unleashed.  The scene where the crew is forced to actually play Battleship by using a grid of coordinates is also kind of clever, when in the energy bubble, with no communication, radar or satellite, the group uses NOAA tidal buoys to measure water displacement and as the alien ships move across them, they are able to see them on the grid and can launch missile accordingly.  There is lots of shit blowing up but there’s not a lot of context or explanation for most of it, especially when the aliens launch their weird, intelligent orbs that cause very specific damage to a small section of Oahu.

Battleship is loud and dumb but not very much fun, which is arguably the most important factor for summer blockbusters.  It might be worth checking out on DVD when the inevitable Rifftrax is available and you have some booze but it’s definitely not worth checking out in theaters.