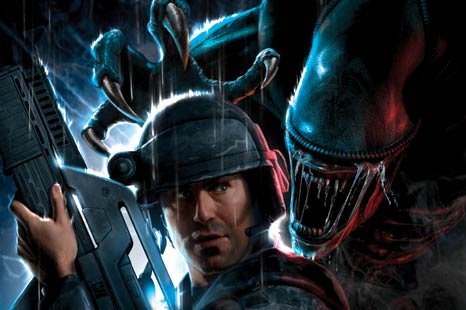 Even though everyone involved is being cagey about how closely Prometheus is tied to the Alien franchise, it’s definitely set in the same universe with evil mega corporation Weyland-Yutani involved somehow, cyborg crew members and the Space Jockey.  For a refresher on where the universe goes after Prometheus, check out our Franchise Flashback of the Alien series below. 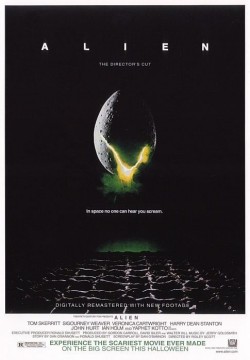 Alien (1979): The original classic, directed by Ridley Scott, follows series heroine Ellen Ripley, played by Sigourney Weaver, and the crew of the Nostromo space towing ship as they investigate a mysterious signal on a nearby planet.  The crew discovers a giant alien craft with alien bodies inside that appear to have been exploded from the inside out and mysterious, egg like structures.  One of the crew, Kane, is attacked by a creature that bursts out of one of the eggs but seemingly fights it off without incident but later, in one of the most classic movie scenes ever, his chest explodes open while the crew is eating dinner, unleashing a Xenomorph onto the ship.  The crew is hunted and killed off one by one and, to make matters worse, the ship’s android crew member, Ash, has been ordered to return the specimen back to Earth, even at the expense of the crew.  Ripley manages to stop Ash and and activates the Nostromo’s self destruct and boards a shuttle.  Unfortunately, the xenomorph follows her onto the shuttle by Ripley manages to blow a hatch and force the xenomorph into space.  Ripley then puts the ship on a trajectory back to Earth and puts herself in stasis.  Alien perfectly combines the world building and ideas of science fiction with the tension and jumps of the horror genre. 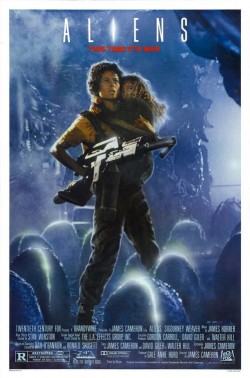 Aliens (1986): In Alien, one xenomorph was enough to kill an entire spaceship crew but everything was kicked up a notch for James Cameron’s sequel, Aliens, with more characters, more aliens and more action.  Ripley is found after 57 years in stasis and is asked, because of her unique expertise, to go with a team of marines to the colony of LV-246, founded on the planet the Nostromo crew investigated in the first movie.  Upon arriving, it’s clear that something is horribly wrong as the colonists are missing and a weird, organic looking structure is built up in the colony’s power facility.  All hell eventually breaks loose and most of the marines are killed by a swarm of xenomorphs and the group’s dropship is destroyed when a xenomorph kills the crew.  The survivors try to fortify themselves in the colony while android Bishop tries to remotely bring a second dropship down to the planet.  Weyland-Yutani executive, Carter Burke, reveals himself as a true employee by trying to get Ripley and young survivor, Newt, infected with alien embryos, so that when they are put on stasis for the trip back to Earth, the specimens will be safely transported.  Newt and Ripley are saved just in time by the marines, led by Sgt. Hicks but the xenomorphs break in and capture Newt  and kill everyone but Hicks and Ripley.  Bishop arrives in the second dropship but Ripley loads up on weapons and heads into the heart of the nest to rescue Newt.  Ripley manages to blow up the xenomorph egg cache but unleashes the Alien Queen.  Ripley and Newt make it to the surface just in time to escape the Queen and escape the explosion of the power facility, which was damaged by the crashing of the first dropship.  Back on the marine’s ship, the Alien Queen is revealed to have been hanging onto the dropship and horribly damages Bishop.  Ripley mans a power lifter exoskeleton and attacks and defeats the Queen. 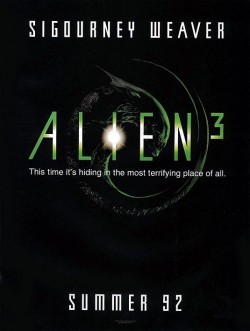 Alien 3 (1992): Probably the movie in the series that causes the most mixed reaction, Alien 3 was the debut of David Fincher as a big time director.  Shortly after Aliens, the spaceship Sulaco experiences a fire and ejects an escape pod containing Ripley, Newt, Hicks and Bishop in stasis.  The pod crashes on the nearby planet of Fiorina 161, a prison planet inhabited by psychotic and dangerous inmates.  Newt and Hicks are killed in the crash and it’s revealed that a facehugger alien was stowed away on the pod as well.  The facehugger attacks the prison’s dog and grows into a full grown xenomorph and starts attacking inmates.  Ripley, worried about where it came from, has the prison doctor perform an autopsy on Newt, by finds no embryo.  Ripley and the doctor are attacked in the infirmary by the xenomorph but it mysteriously backs off from attacking Ripley.  Ripley rallies the inmates into attacking the xenomorph with toxic waste but the xenomorph causes the waste to explode, killing several inmates.  Ripley scans herself with equipment on the ship and finds that she was infected by the Alien Queen and has an embryo inside of her.  She makes a deal with the leader of the inmates that they will kill her to stop the spread of the xenomorphs and to stop Weyland-Yutani from getting specimens and turning them into weapons.  The inmates leader, Dillon, agrees and the group leads the xenomorph into the prison’s molten molding facility.  The inmates try to trap the xenomorph behind a series of door and poor molten lead on it but the plan backfires and all the inmates are killed except one, Morse.  Weyland-Yutani troops arrive and try to capture Ripley after she battles and kills the xenomorph but she throws herself into the facility furnace just as the embryo explodes out of her chest. 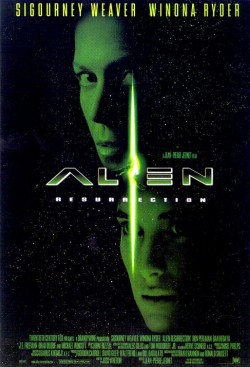 Alien: Resurrection (1997):  Although it’s hard to imagine how Ripley would continue her fight against the xenomorphs after the events of Alien 3, Resurrection kind of figured out a way to bring her back to the dead, thanks to director Jean-Pierre Jeunet and writer Joss Whedon, yes, that Joss Whedon.  200 years after Alien 3, a science on the military ship Auriga clone Ellen Ripley and the Alien embryo that was growing inside of her using blood samples taken before her death.  Since her DNA was mixed with Alien DNA during the cloning process, Ripley develps superhuman strength, acidic blood and a telepathic link with the xenomorphs.  A mercenary ship, the Betty, arrives and delivers a group of humans to the scientists, to be used as guinea pigs and purposefully infected by facehuggers.  Several xenomorphs mature and cause havoc on the ship.  Ripley leads the survivors through the Auriga in an attempt to reach the Betty and use it to destroy the Auriga and the aliens but are met by a newly modified Queen, which has human DNA spliced into it and now has a womb, letting it create new xenomorphs without the need for human hosts.  A newborn alien is born but recognizes Ripley as it’s mother and kills the Queen but Ripley in turn kills it when it attempts to attack fellow survivor, the android Call.  The survivors escape on the Betty as the Auriga crashes into the Earth.