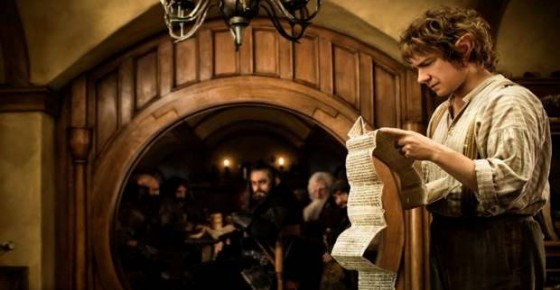 There’s been a lot of grumbling and arguing about whether or not The Hobbit needed to be divided into three movies.  To that I say, if the other two movies are as fun and exciting as this first one, I don’t care how many there are.

This first part of the story find hobbit Bilbo Baggins, 60 years before The Lord of the Rings, being tricked by the wizard Gandalf into joining a company of dwarves, led by Thorin Oakenshield, to reclaim the dwarves home city of Erebos, which was taken over by the vicious dragon, Smaug.  Along the way they run afoul of trolls, goblins and are hunted by a pack of orc warg riders, whose leader has a personal grudge against Thorin.  You don’t necessarily have to have watched the LotR trilogy to enjoy the Hobbit but there’s so many references and nods to the trilogy that you may miss out on if you haven’t seen them.

Martin Freeman, of Sherlock and The Office, is absolutely fantastic as Bilbo with the perfect sense of exasperation, fear but ultimately bravery.   The movie does a great job of showing what an integral part of the group Bilbo becomes; he may not be the best fighter but he has extremely quick wits and is able to bail the group out of more than one predicament.  His game of riddles with Gollum, played as brilliantly as ever by Andy Serkis, is easily one of the highlights of the movie.  Ian Mckellan returns as well as Gandalf the grey and it seems like he gets to have slightly more fun in that form than the more serious Gandalf the white of The Two Towers and Return of the King.  Rounding out the main cast is Richard Armitage as Thorin, who brings a great balance of bad assery to the much more humorous tone of the movie.  The rest of the dwarves are fun but, with one or two exceptions, they all sort of blend together.  You still feel attached to them by the end of the movie but hopefully the next two films will flesh them out more.

As far as the action and battles go, The Hobbit, though definitely smaller scale than any of the Lord of the Rings movies, still lives up to the thrills and creativity.  If you loved the sequences where the fellowship is escaping Moria on the collapsing stone stairs, you will love the dwarf company’s escape from a goblin city.  There’s also a fantastic battle sequence showing the battle outside of Moria between the dwarves and the orcs and there are multiple exciting chases and fights with the orcs and their wolf like wargs.  The music definitely helps lend a sense of epicness to the battles as well, with Howard Shore returning and bringing back some familiar songs along with new tracks, most notably turning Thorin’s Song into a recurring theme.  Just like the LotR trilogy as well, the New Zealand locations are as gorgeous as ever and help make you feel like you are in Middle Earth.

Whether or not you feel like The Hobbit should have been one movie, it’s now a trilogy and this first entry is an extremely fun and exciting return to the world of Middle Earth and if the next two movies can keep up the pace of this one, we are in for another great fantasy trilogy from Peter Jackson