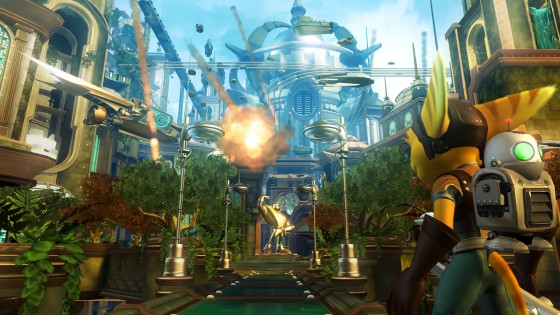 Sony announced today that we can expect an animated Ratchet & Clank movie to hit theaters sometime in 2015.  Check out their great announcement video below:

In case you aren’t familiar with the game series (and if you aren’t, stop what you are doing and buy and play them now) they follow the adventures of lombax Ratchet and his robot friend Clank, who face down all kinds of intergalactic threats from power hungry CEOs to megalomaniac game show hosts to their arch nemesis, Dr. Nefarious, with a variety of ridiculously over the top weapons and gadgets.

The writing of the series has always been top notch and hilarious, with instantly classic characters like Nefarious and Captain Qwark, who is supposed to be the galaxy’s greatest hero but is more Zapp Brannigan than Captain Kirk, and the writer of the games, TJ Fixman, will be writing the script.  Insomniac, the studio behind the games, will be working with Blockade Entertainment and Rainmaker Entertainment to create the movie.  I love all the games in the series and the characters, so I am super excited about this.   2015 is shaping up to be absolutely legendary at the box office.

Black Dynamite is Coming this Fall