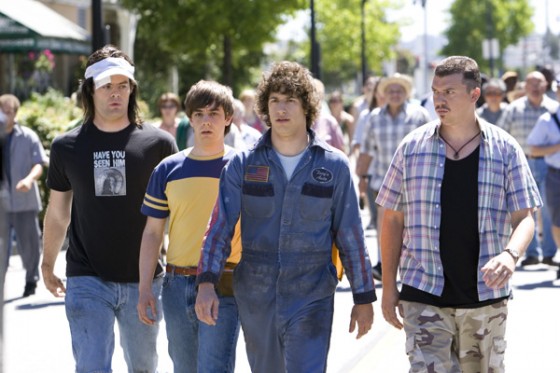 One of the most underrated comedies of the last few years has to be Hot Rod.  It had a killer cast including Andy Samberg, Bill Hader, Danny McBride, Ian McShane, Will Arnett, Jorma Taccone and Isla Fisher and besides all the hilariously awful stunts performed by Rod Kimble and bizarre Lonely Island humor, one of the most distinguishing features was it’s use of music.  Much like Iron Man 2 featured almost exclusively AC/DC songs, Hot Rod used almost the entirety of Europe’s The Final Countdown album for it’s soundtrack, along with a parody of the angry dancing scene from Footloose and an inspirational montage turned riot set to John Farnham’s “You’re the Voice”.  Check out some of the scenes and songs below.

“Danger on the Track” by Europe

“Rock the Night” by Europe

“Heart of Stone” by Europe

“Time has Come” by Europe

Rod’s crew dances to “Two of Hearts” by Stacey Q