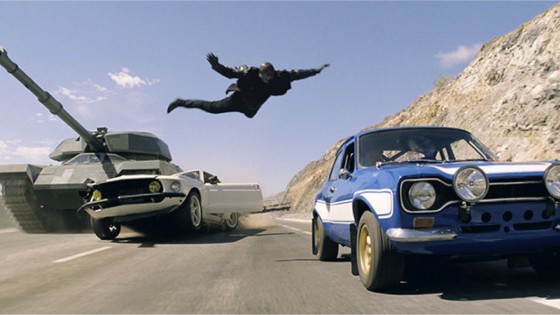 When Fast Five came out in 2011, it didn’t just revitalize the Fast & Furious franchise, it became one of the best action movies of the last decade or so.  The injection of The Rock into a hand picked team of all stars from all the previous Fast movies combined with over the top action set pieces rightfully made it one of the biggest blockbusters of that year. Fast & Furious 6 has all the same elements but is not quite up to the level of it’s predecessor, but is still a ton of fun.

Picking up on the mid-credits tease at the end of Fast Five, it’s revealed that Letty is alive and working with a dangerous hijacking crew led by former spec ops soldier, Owen Shaw.  “You need wolves to hunt wolves” according to Hobbs so he recruits Dom and the crew with the promise of full pardons and a reunion with Letty and they attempt to stop Shaw from stealing the components for a MacGuffin EMP(?) weapon.  Luke Evans is a pretty great villain as Shaw and they set him up as sort of the anti-Dom, obsessed with having the most efficient team possible with no regard for the safety of civilians or his team while Dom would gladly die for anyone in his crew.  The reveal of why Letty is with Shaw is pretty cliche but the movie actually does a pretty good job of rebuilding the relationship between Dom and Letty.

At this point in the series, the Fast & Furious crew are basically The Avengers in that they are basically superheroes but also a team where everyone has a specialty and are strongest when they are together.  They are all amazing drivers but it’s great that Han is not the best hand to hand fighter, Dom isn’t the best shot and Tej is the tech expert and hangs back most of the time. (There’s even a scene where they basically get an “Avengers Assemble!” call from Dom).  All the characters are incredibly likeable as well, especially the team they have assembled in 6 and it’s just fun hanging out with them.  Part of that likability comes from the almost obsessive care and attention given to the history of the series.  I defy you to name another series that has been going on for as long as this series has that drops references and brings up key plot points from every movie prior.   The writing and chemistry between everyone is great as well and gives the movie a wonderful sense of humor.  The team is assembled from every movie and characters and events from 1, 3 and 4 are key to this plot.  The only other series I can think of that has that same level of detail and reference is the Saw franchise, which makes director James Wan’s hiring for 7 make much more sense.

Fast Five had some incredible action set pieces from the favella chase to the Dom vs Hobbs fight to the bank safe dragging finale and there are some great sequences in Fast & Furious 6 but none of them really reach the same level.  I think the main reason is that most of them occur at night and at times, especially during the final sequence, it’s a difficult to tell exactly who is doing what.  The opening chase at night is great with it’s introduction of “ramp cars” that look like modified Formula One cars with a metal ramp on the front that allows it to blast head on traffic into the air.  The best sequence is the one that takes place during the daylight, where Dom and the crew attempt to stop Shaw from getting the last component to the weapon he’s building and have to use muscle cars against a tank.  There’s also more CG than in Fast Five and while it’s nowhere near as bad as the “CG tunnels of doom” in Fast & Furious, there was great use of practical effects in Fast Five that is not replicated in Fast & Furious 6.

The series has come a long way from it’s Point Break aping beginnings and Fast & Furious 6 keeps up the transition to insane action that Fast Five revitalized the series with but the murkyness some of the action keeps it from being as great as it’s predecessor.  I’m still a huge fan of the series and the reveal of what is coming in 7 (hang around in the theater for an extra five minutes or so at the end of the movie) has me even more excited.