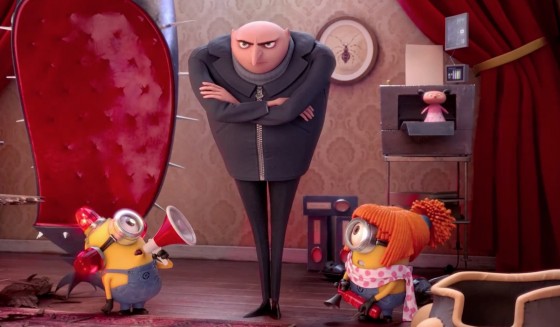 When “Despicable Me” hit theaters in 2010, no one knew quite what to expect. The teaser was the barest of bones; featuring small stubby yellow goggle-wearing beings which we would come to know and love as minions. Someone replaced the pyramids with blow-up versions. And then there was some guy (main character?) freezing everyone in line at a coffee shop.

Three years later, and that kind of build up to the first “Despicable Me” movie is gone. We know the premise — former evil villain tries to raise three rambunctious girls on his own — and because of that, we know where the plot has to head. Gru has to have a new purpose (FIGHTING evil this time!). He needs to have a partner, preferably female to fill the girls’ “mother” role (enter Kirsten Wiig as the goofy Lucy Wilde). And the minions need to have their spotlight as well. (I’ll hold off on that one for spoiler purposes.)

So yeah, predictable. We know what we’re getting into this time around. But it isn’t so bad. The humor is there, and Carell and Wiig are pretty good voice actor. Leave it up to this second installment to know what it’s strengths and weaknesses are. Weakness would have to be the girls — in the midst of Gru’s big mission, they aren’t really given anything to work with. The older one becomes infatuated with a smooth-talking tween while the youngest yearns for a mommy. Makes sense.

“Despicable Me 2” isn’t going to blow anyone away with heart or laughs but it still serves as half-decent family entertainment. Action wise, there are some cool scenes undercut by some sly comedy. But this isn’t a particularly hilarious or exhilarating movie. They also draw from the minion-related comedy well a little too much. (There’s a parody towards the very end that is executed to hilarious perfection though. Watch this video before you head to the movies.)

In the end, typical family fodder and judging from the receipts, more Gru and minions are to come. Let’s hope the shelf life lasts a little longer.

Trey Parker Wields the 80s in Despicable Me 3 (Trailer)