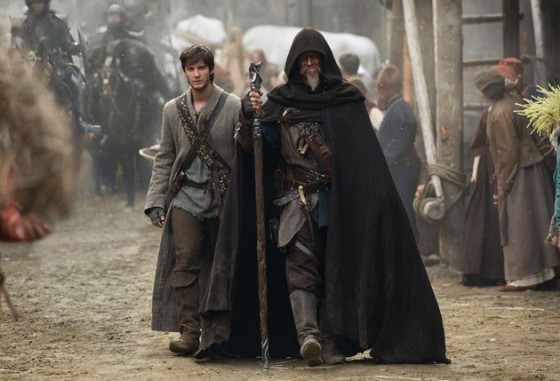 Jeff Bridges is Gandalf by way of Rooster Cogburn in the upcoming fantasy movie, The Seventh Son.  Bridges stars as John Gregory, a Spook or light wizard who fights against the dark magic of the world.  An ancient evil in the form of the witch, Mother Malkin, played by Julianne Moore.  Gregory gets a new apprentice in his battle with young Tom Ward (Ben Barnes), who is the seventh son of a seventh son and has the potential to be an incredibly powerful magic user.  Dijimon Honsou is also in the movie as Radu, who appears to be some sort of assassin. It looks like a pretty interesting fantasy world, definitely more low fantasy in the vein of Conan, with some crazy looking monsters and magic.  The movie is out in January next year, and you can check out the trailer below.