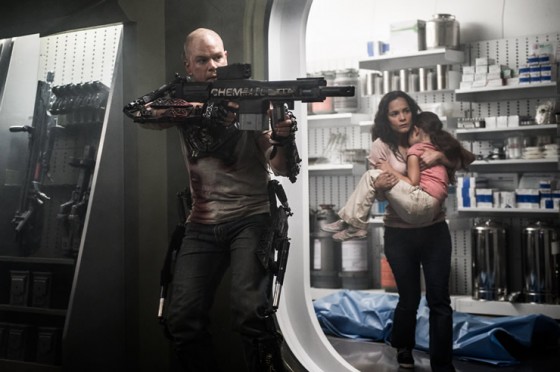 Originally set to direct the Halo movie, Neill Blomkamp set out to create his own unique sci-fi vision after it fell through with District 9 and now, with a much bigger budget and more star power, he brings us Elysium.

The movie follows blue collar factory worker, Max (Matt Damon), who gets into an accident and is exposed to a high dose of radiation, giving him only days to live.  Desperate to get to the orbiting space station, Elysium, where the rich live in luxury and any disease can be cured, Max agrees to get strapped with an exo-skeleton and go on a heist for his old criminal asssociate, Spider.  The heist, which is to download data from rich CEO John Carlyle’s (William Fichtner) brain implant, draws the attention of Elysium’s Secretary of Defense, Delacourt (Jodie Foster), who sends her assassin Kruger (Sharlto Copley) after him.

Almost immediately, you can tell that you are watching a Neill Blomkamp movie, as he has created a very unique style of sci fi where everything is futuristic but also simultaneously out of date.  There’s futuristic weapons, space shuttles and robots but they all feel very lived in and beat up.  This is especially true of all the computer screens that people use, that fell right out of Fallout and  the exo-skeleton Matt Damon wears feels like something that was slapped together in a guy’s garage, especially when you see a super advanced, military style suit later.  There’s also lots of cool weapons or modifications of weapons.  There’s a rifle that is straight out of Halo and there’s an AK-47 that has a mod with exploding bullets, that work to devastating effect against the robot bodyguards in the movie.  The special effects in the movie are absolutely fantastic, just like in District 9, just given that extra layer or two that the budget he has now provides.  One thing in the beginning of the movie that disappears is a great sense of satire, almost Robocop level, as Max gets into an altercation with a robot police officer and then has to go see his robotic parole officer at what basically amounts to a DMV.  This funny tone quickly turns grim when Max has his accident, so that is a little disappointing.  One other thing about the world is that the social commentary is pretty heavy handed.  I feel like District 9 was a little more subtle with it’s apartheid imagery but in Elysium, the message is that the rich are pure evil and the poor need to take them down.  Every single person on Elysium is a horrible, arrogant bastard while pretty much everyone on Earth is honorable and working for the greater good.

Acting wise, Matt Damon is good but like I just mentioned, I wish it would have maintained the humor.  Max turns grim and serious very quickly and it’s not that different from Bourne.   Sharlto Copley brings another insane, unique character as Kruger, who lives on Earth but works for Delacourt and is activated for missions.  He wears an exo-suit just like Max but his main weapon is a katana, making him kind of a South African/Australian cyber ninja.  Jodie Foster seems to be enjoying devouring scenery as Delacourt, trying out some sort of French(?) accent and hissing out orders.  William Fichtner is great as usual and brings a number of great vocal and character quirks, such as forcing everyone on Earth to cover their mouth while talking to him so he doesn’t get “germs”.  One thing that may clear itself up in a second viewing is that some of the characters, especially Wagner Moura as Spider and Sharlto Copley have very heavy accents, so it may be hard to hear exactly what people are saying.

Similar to District 9, there is lots of great, and violent, action in Elysium.  One of the best sequences is the whole data heist scene where Max and his crew first have to fight robots and then Kruger and his mercenaries.  You get bird’s eye views from Elysium and there’s lots of different weapons and technology happening.  The final battle between Kruger and Max is pretty great too, although the movie does unfortunately devolve into almost incomprehensible shaky cam during some of the fight scenes.  There’s tons of ridiculous gore in the movie too, if you’re a fan of that sort of thing.

Overall, Elysium is definitely one of the better movies of this summer but I think District 9 edges it out a tad with a less ham fisted message and a tighter story.  There’s tons of awesome sci fi tech and action that makes Elysium worth checking out and it’s just a cool movie overall.