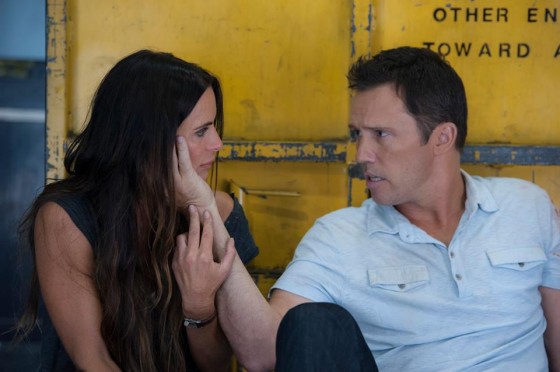 This is it, the final episode of Burn Notice.  After seven years of spy tips, mojitos, clients and explosions, it all came down to last night’s episode.

The cliffhanger of last week’s episode was quickly resolved as, obviously, Michael killed Sonya to stop her from killing Fi and the two fought their way through James’ men to a Humvee that Sam and Jesse stole.  The reunited group decides that they need to get supplies and flee but at a convenience store, they learn that the CIA is also after them, putting up awards for their capture and claiming they are armed and dangerous fugitives.  Sam and Jesse get held up by the convenience store clerk but Michael drives a car through the front of the store and takes a shotgun blast to the arm, but manages to take out the clerk and the four escape.  Michael tells the group that their only chance is to stop James, because that is the only thing that they want more than them.  While Jesse goes to talk to one of his contacts about James’ communication center in Miami and Fi and Sam gather supplies, Michael goes to visit his mom and gives her an emergency phone and then tells her that he might not make it.

Jesse gets intelligence that a local satellite expert named Max Lister (played by special guest Alan Ruck) set up James’ network and the gang attacks him on the road but find out his car is armored and Michael has to do another death defying stunt by jumping onto Lister’s car with a C4 charge and detonating it to flip it.  Michael then proceeds to walk into the growing puddle of gas and starts shooting into it, risking blowing himself and Lister up but Lister finally gives in and shows them the building where James’ network is.  Earlier, Michael asked Jesse to stay behind to protect Maddie and Charlie, so Sam, Fi and Michael infiltrate the facility but learn that James’ tracked their pre-paid cell phones and knows where everyone is.  He comes himself to the communications facility while a group of his men head to the safe house where Maddie, Jesse and Charlie are and Maddie comes to the unexpected decision to sacrifice herself with a block of C4 while Jesse gets Charlie out.  After a tearful goodbye to Michael, Maddie smokes a cigerette and lures in James’ hit squad and detonates the bomb.  Despite how preachy and Buzz Killingtony she was for the last couple episode, Sharon Gless pretty much nailed every scene in this final episode.

Back at the facility, the trio of Fi, Michael and Sam decide to go on the offense and get into a shootout with James and his men.  Sam makes it into the lower level while Fi and Michael get caught on top with James and the last two of his men.  Michael goes for one more seemingly suicidal manuever and runs at James while Fi takes out the two guards and then tosses her gun to Michael who uses it to finally take out James.  But James reveals that he has one more surprise, a dead man’s switch tied to explosives and he detonates it, blowing up the entire building.  Sam gets out but the sheer size and quickness of the explosion makes it seem unlikely that Michael and Fi made it.  Jesse and Sam are taken into custody by the CIA but Strong pulls some strings and gets them fully pardoned and Michael gets a star on the CIA’s wall of heroes.  After Fi and Michael’s funeral, Sam asks Jesse if he wants to go meet a friend of Elsa’s who needs help with something, setting up what is hopefully the spin-off show/movie while we learn that, of course, Michael and Fi managed escape by jumping out a window into the ocean and escaped with Charlie to Ireland to live a quiet, normal life.

Will Burn Notice go down as one of the best shows ever? probably not.  Was it consistently fun and entertaining for most of it’s seven years? hell yes.  The final episode had an excellent balance of action, character moments and fan service and gives a nice sense of closure but leaves things open for the return of all the characters.  All the characters got at least one big, final hero moment and there were tons of great references to the very first episode for long time fans and it was overall, just a great way to close out the show.