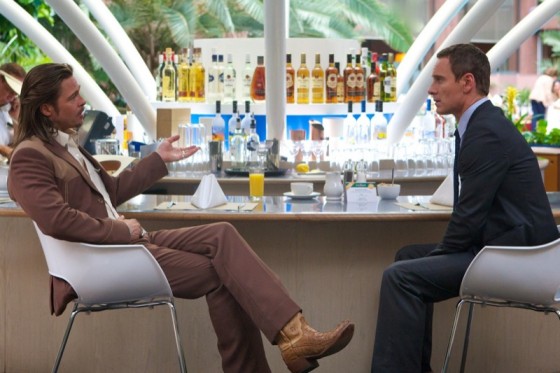 It’s been a pretty great few weeks at the movies lately as the back to back pairing of Gravity and Captain Phillips delivered two of the best movies of the year and it seemed like The Counselor was going to continue that run, as it had director Ridley Scott at the helm, it’s written by Cormac McCarthy of No Country for Old Men and The Road and features an all-star cast that includes Michael Fassbender, Brad Pitt, Javier Bardem, Cameron Diaz and Penelope Cruz.  That’s why it’s so baffling and disappointing that it is a pretentious, meandering mess of a movie.

What little plot there is concerns Michael Fassbender’s unnamed Counselor in need of some quick cash for some reason, even though he seems to be doing pretty well driving a Bentley and buying his fiance (Cruz) a massive diamond engagement ring.  The Mexican cartel in Juarez is sending up a shipment of cocaine that is worth $20 million and the Counselor has invested, I guess, in getting it delivered.  Living in a post Breaking Bad world and the realism and tightness of the drug business of that show has raised the bar permanently for drug/crime thrillers and for a movie that’s supposed to be that, it could not care less about the actual drug dealings.  It spends the first hour and a half on scene after scene of dialogue between characters, all of which is self important, pretentious philosophizing about the nature of relationships, sex, power, etc.  In the last half hour, as if sensing the audiences’ growing indifference and/or rage, the movie does try to make things happen but it is way too little to late and by the end, at least for me, I could care less about what was going to happen.

The cast does their best to deliver McCarthy’s lengthy, ridiculous dialogue but even actors as great as Fassbender and Bardem get buried by it eventually.  The Counselor doesn’t really have characters as much as it has vague concepts and Cameron Diaz’s character is seemingly the only character aware of what is going on and so thoroughly outmaneuvers everyone else in the movie that is kind of ridiculous.  The Counselor is definitely no Walter White and immediately crumbles when the deal goes south and his fiance is kidnapped.  The movie also just throws new characters out with no explanation.  There is a scene between Dean Norris and John Leguizamo where the drugs arrive at Leguizamo’s chop shop but I still have absolutely no who Dean Norris’ character is, who he is working for or what he’s even trying to do and the characters are never seen again.  I’m not opposed to talky movies, I love most everything Tarantino does, but in Tarantino movies, there’s usually a great sense of underlying tension that the dialogue is going to end with some horrific violence but The Counselor lacks any sort of tension or suspense.

I can’t believe I’m going to compare The Counselor to Pain & Gain but it feels like it has the same issue as that disaster in that it’s not playing to the strengths of the director and fails because of that.  Scott’s strengths are world building and setting and amazing action set pieces and The Counselor has none of either.  His last movie, Prometheus, may have arguably been a mess as well but at least interesting things were happening, unlike The Counselor.  The worst part is that there are the tiniest glimpses of the cool things that could have happened.  The sewage truck carrying the drugs changes hand multiple times and there’s a few cool sequences involving metal wire decapitating people but these scenes are few and far between.  From the man who gave us epics like Gladiator and Kingdom of Heaven, you would hope there would be at least one memorable set piece action sequence.

The Counselor was a massive disappointment considering the amount of talent assembled for it.  McCarthy’s script is pretentious and meandering while Scott doesn’t bring any of his trademark realism or action to the movie.  If the cast wasn’t as good as it is, this movie would be a complete and utter disaster but even with the cast, by the time you get to the end, if you’re like me, you won’t care at all what happens.  A shocking skip recommendation from me.