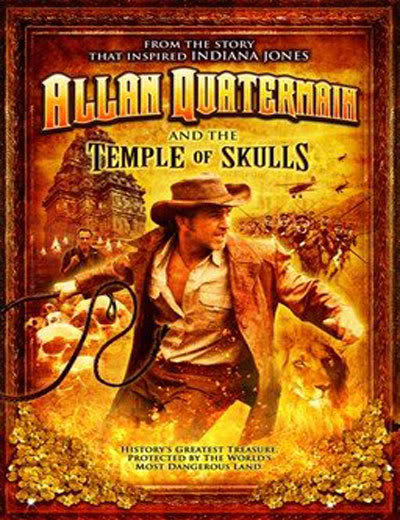 2008 saw the fourth Indiana Jones movie, Kingdom of the Crystal Skull come out and crush the dreams of most Indiana Jones fans waiting for the return of everyone’s favorite archaeologist.  When the movie they are ripping off is terrible, what happens to The Asylum’s version.  The answer is maybe the most boring adventure movie ever made, Allan Quartermain and the Temple of Skulls.

Back to no recognizable star this time?: Yup, I’m guessing The Asylum spent most of the budget for this one FILMING IN GODDAMN AFRICA!

How in the hell does The Asylum have enough money to shoot in Africa?:  Mind blowing right?  Apparently this entire movie was shot on location in South Africa but a lot of it feels like it was shot in Disney’s Animal Kingdom.  Shooting on location also didn’t really help set the time period of the movie, which I’m assuming is early 20th century but could be the present with all the non attention paid to clothing, set design, etc.

They travel by train at least: Yeah, for about two scenes and the “train” feels like a train you would ride at a theme park to get a tour of the park, it’s only two cars and moves at snail’s pace.  It’s also the setting for possibly the lamest gun fight ever as Quartermain and the villain, Hartford, miss at point blank range and jump around like kids hopped up on Mountain Dew.

Isn’t Allan Quartermain supposed to be an incredible shot?: That’s what I thought too but he barely does any shooting in this movie and, when he does, he whiffs unless he’s at point blank range.  He’s definitely no Sean Connery (I would also rather watch League of Extraordinary Gentlemen again than this).  The movie is also in the weird John Carter area where Quartermain is the character that all other adventurers and the adventure tropes come from but movies like Raiders have perfected those tropes so well, this movie and the character feel even more like the lame knockoff they are.  Quartermain in this movie also just doesn’t seem like an adventure hero.  He’s quiet and sad and doesn’t have any sort of gruffness, charisma, swagger or bravado that all the classic adventure heroes have. 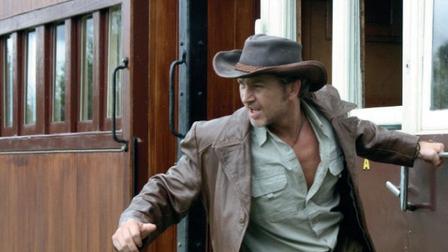 What sort of peril do Quartermain and his crew run into?: Well, there is a not particularly dangerous swarm of locusts that annoys them in one scene and they are captured by a tribe of natives who rely on a female Rick James to figure out if they are trustworthy or not: 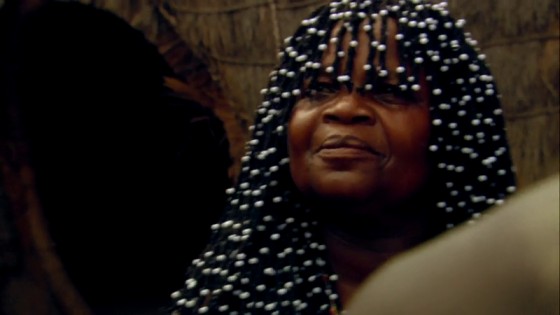 Luckily, Quartermain’s housecleaner is actually the queen of the tribe and they are free to head off and rescue the helpless and useless Lady Anne and discover King Solomon’s Mine.

King Solomon’s Mine, I thought there was a Temple of Skulls: Nope, that was all BS to trick people.  The movie is actually a VERY loose adaptation of King Solomon’s Mine by H. Rider Haggard (and is public domain so more money for Africa, bitches) 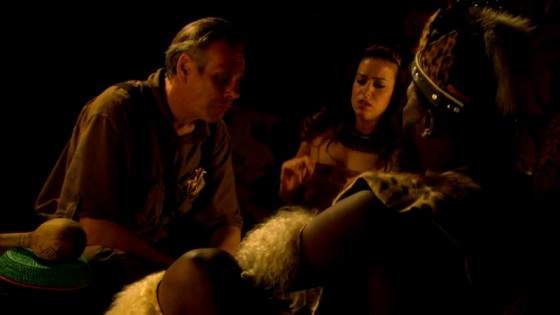 So how does this thing end?  With a lame fist fight between Hartford and Quartermain before, for literally no reason, the mines start collapsing and Quartermain and Co. must escape before they are trapped.  They then head back to the tribal village and smile like lunatics in front of the new queen.

Is it worth watching?:  Dear god no, it’s mind numbingly boring since most of it feels like The Asylum’s vacation videos of their African safari and the characters spend most of the movie just wandering around aimlessly.  The only really bizarre Asylum touch is that there is a glove weapon that lets people rip heads off that is used twice in the movie.  Watch any of the Indiana Jones movies again, The Mummy, Romancing the Stone, hell, even those TNT Librarian movies with Noah Wyle instead of this.

Next Time: The Asylum rents four cars and stages their own version of Death Race.