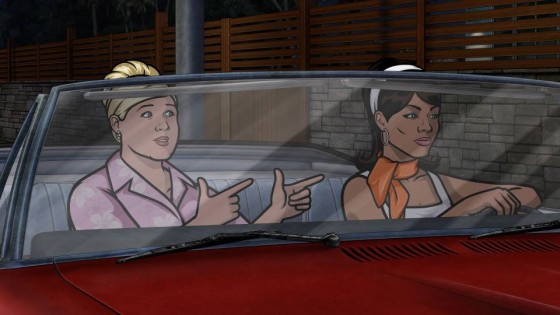 We are officially into Archer Vice now and the first job for the ISIS crew’s new cocaine business is for Archer, Lana and Pam to head down to Miami to sell their first 20 kilos of coke to a buyer Mallory has set up.  The gang is also all living together in Cheryl’s mansion, except Mallory, who of course hid all her assets so the government couldn’t take them like everyone else.

Since Dr. Kreiger didn’t create a magical way to smuggle cocaine without it being detected, the gang’s plan B is to create a giant body cast of cocaine for Pam to wear on the plane to Miami, letting the drugs seep into her skin and pretty much guaranteeing she’s going to be a hilarious, cocaine fueled monster for the rest of the season.  When the gang gets to Miami, they find out that their contact is Ramone, who Archer met way back in season 1 when he first tried to “seduce” him and then protected him from assassins sent by Fidel Castro.  Ramone wants to buy the club across from his small food stand he’s been running since going into hiding and Archer is instantly excited for it to be ISIS’s Miami office.  The deal goes bad when it’s revealed the buyers are Charles and Rudy, the gay hitmen who tried to kill Ramone.  They steal the drugs and the money and the gang regroups and tries to break in to the couple’s house to get the money back.  Things go bad and Ramone, Charles and Rudy are all killed in a shootout, which Lana gets to just in time to see Archer giving Ramone one last kiss.  Back in NYC, Cyril reveals that the money is counterfeit and it was all a convoluted (and dumb, dumb, dumb according to Charles) plan by Ramone to get the drugs and keep ISIS from looking for them again.

While all that was going on, Cheryl is also driving Ray into a drunken stupor as her country vocal coach but the crew is shocked to learn that she has a great voice when she thinks no one is watching.  Get ready for the debut of Cherlene!

For ISIS Eyes Only: Arrival/Departure

For ISIS Eyes Only: Filibuster

For ISIS Eyes Only: The Rules of Extraction