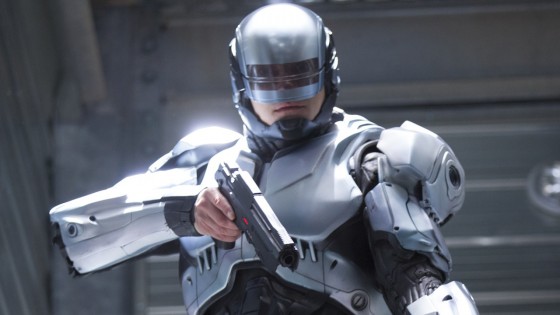 I don’t think it’s surprising that Robocop, the original, is one of our all time favorite movies here at Everything Action.  It’s a classic along with Terminator 2, Commando, Die Hard, Rambo, etc.  The new version may be slightly flashier but completely lacks the teeth and over the top bad assery of the original.

This new version follows Joel Kinnaman as Alex Murphy, a Detroit cop who is trying to track down an arms dealer with his partner, Jack Lewis (Michael K. Williams).  A pair of corrupt cops working with the arms dealer, Antoine Vallon, use a car bomb to try and kill Murphy but he survives, barely.  His wife Clara, trying to save his life, makes a deal with Omnicorp to turn Alex into a cyborg.  Omnicorp has shady motives however and want to use Alex to sway public opinion against a bill prohibiting the use of drones on American soil.  The plot gets increasingly convoluted as it goes along, with Alex bouncing back and forth between normal and robotic according to the whims of Omnicorp CEO, Raymond Sellers (Michael Keaton).  The movie also spends way too much time focusing on Alex and his family.  The original gave you all you needed to know to feel the tragedy of Murphy losing his family in two short scenes.  This version drags things out through the entire movie and it doesn’t add anything new or interesting.  Abbie Cornish seems to only be there to look sad and cry single, perfect tears down her face. Joel Kinnaman is all right as Murphy and has a few scenes where you definitely feel the horror of his situation but he’s just not up to the level of Peter Weller.  Lewis is also a complete waste of a character, barely factoring into the plot until about the last 5-10 minutes, unlike Nancy Allen in the original, who was one of the spunkiest and most competent action heroines ever.

I appreciate that the movie is trying to update the message to a more modern concern with the issue of drone warfare but it’s only really focused on in the opening sequence, which finds a “safe and efficent” Tehran being subjected to random, invasive patrols by ED-209s and EM-208s and then fighting a group of suicide bombers.  The closest the movie gets to matching the satirical edge of the original is during the segments with Samuel L. Jackson, who plays a Bill O’Reilly type news personality, Pat Novak, and is constantly trying to convince America to embrace drones on his flashy, hologram filled show, The Novak Effect.  There’s a little bit of fun too with Omnicorp’s marketing of Murphy but there’s not anything near the craziness of ED-209 decimating an executive during a board meeting.  All of the political satire that could have happened is pushed aside for the family drama of the Murphies.

Another place where this new version falls far from the original is in the villains department.  Clarence Boddicker and Dick Jones are two of the greatest action movie villains ever and this new version has some of the blandest villains I’ve seen recently.  Antoine Vallon, who seems to be the Clarence replacement, is basically a non character.  I feel like in the screenplay he was listed as Antoine Vallon: Bad Guy and that’s all the description had.  The one character who comes closest to the original villains is Jackie Earle Haley as the ex-military guy in charge of Omnicorp’s drones, who believes Murphy’s humanity is a weakness and a liability and constantly refers to him as Tin Man, even breaking his balls during a training session by playing “If I Only Had a Brain”.  Michael Keaton just seems bored as Raymond Sellers and feels like they combined Bob Morton and Dick Jones into one character, but homogenizing it into just a bland, generic evil businessman.  The only character who is slightly more interesting, probably mostly due to the fact that it’s Gary Oldman, is Dr. Norton, who is kind of the Dr. Frankenstein to Murhpy’s Monster and has to wrestle with progressing science or helping Murphy keep his humanity.  Even though he’s one of the few “good” people at Omnicorp, he still seems not that concerned about doping Murphy’s humanity out of him before his big debut in Detroit while in the next scene declaring that Clara Murphy should be able to see her husband.

The movie does have a few things that weren’t possible in the original, like a horrific scene where we get to see exactly how much of Murphy is left.  Because of CG, Robocop is much more fluid and agile as well, which he showcases in the big training battle against an army of EM-208 drones and the climax against a bunch of ED-209s but while the action might be competent, it’s nothing that hasn’t been done better in other action movies.  The one action sequence they update from the original is when Murphy raids the drug factory although it’s not even the main villain and lacks the excitement and catharsis of the original when Murphy finally got to get revenge on Clarence.

The new Robocop definitely falls into pointless category of remakes along with the remake/prequel to The Thing, A Nightmare on Elm Street, etc and feels completely neutered compared to the original.  The original is like a finely aged scotch and this new version is like tap water.