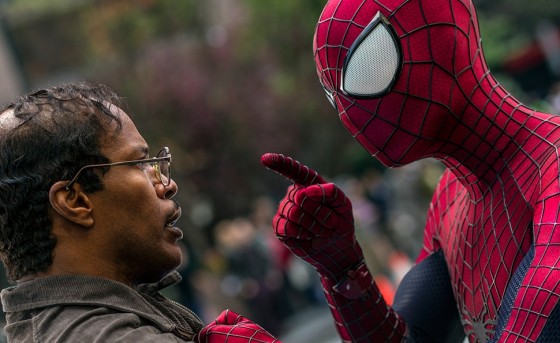 Even though you could tell it mainly existed just to retain the rights to the character, The Amazing Spider-Man was a solid summer blockbuster that had some weird character quirks and plot holes but delivered some great web slinging action.  The action is amped up for the sequel but the weird character and plot quirks are amplified as well, resulting in the mess we were all kind of expecting it to be. (Possible Spoiler Warning)

A short time after the events of the first movie, Gwen and Peter are graduating from high school and Peter is reveling in his status as NYC resident super hero.  About half a dozen plots kick off that includes Harry Osborn returning and trying to find a cure for the apparent genetic disease that ravages the Osborn men, mild mannered but crazy Oscorp employee Max Dillon having an accident that turn him into Electro, Peter learning more about his father’s work and Peter and Gwen breaking up and getting back together in what feels like every other scene.  None of the plots are given the time to develop and the movie whips back and forth between them with little grace or pacing.  The motivation behind why Electro is after Spider-Man is literally Homer’s motive for potentially shooting Mr. Burns on The Simpsons and his eventual team up with the new Green Goblin has the barest bones of justification behind it besides, “the script says we have to team up”.  When the movie just shuts up and switches to web slinging mode, it’s incredible looking and fun, with the opening sequence where Peter stops Rhino from stealing Oscorp tech being a classic Spidey sequence full of creative uses of his powers and zingers.   The first battle between Spidey and Electro in Times Square is fantastic as well, although there is a bizarrely large amount of bystanders at almost every fight in the movie, as if Peter is tweeting out where he’ll be fighting like some kind of cupcake truck.   The movie also suffers from a bloated 2 and half hour run time and “Return of the King” syndrome where there are 3 or 4 natural stopping points that the movie passes by and keeps going for seemingly no good reason except they paid for a mechanical rhino and, damn it, they are going to use it!

The actors do their best with what they have and I like most of them quite a lot.  I think Andrew Garfield and Emma Stone are great together but their back and forth between being in a relationship or not gets incredibly old.  When Garfield is Spidey and dropping one liners, he’s fantastic and much closer to the character than Tobey Maguire, especially in the humor department.  Emma Stone is as delightful as she usually is as Gwen and has some great funny moments herself.   Dane Dehaan is a fantastic actor and makes a fine Harry Osborn but the plot he’s saddled with and what he eventually does is maybe the most egregious thing about this movie.  I don’t think it’s too big a shock that he turns into Green Goblin but his origin is sure to piss off old school Spider Man fans and is just insanely stupid.  What makes it worse is that it feels like they included the character just to feature the most iconic Peter/Goblin/Gwen scene from the comics but it lacks any emotional impact when the villain has been around for maybe five minutes prior in the movie.  Venom in Spider-Man 3 was more developed and had more screen time than Green Goblin in this movie.  It also seems like he’ll be back for Sinister Six and Amazing 3 but I would have much preferred they wait and feature Goblin properly.  Electro’s portrayal will probably also disappoint fans as well, as he has some incredibly bizarre quirks and basically becomes Robert DeNiro from The Fan but with electrical powers instead of knife skills.  He also apparently is driven crazy by metal dubstep voices that he hears in his head? It’s a weird performance overall from Jamie Foxx and I’m not 100% sure what they were trying to do with the character. There’s also not that much revealed about Richard Parker’s work, or at least not that much considering how convoluted the path to finding out what he was working on is for Peter, including finding secret subway stations and piecing together articles like a conspiracy theorist.  There are a couple of cool cameos from characters who will most likely factor into future movies like Felicia Hardy but it’s mainly just to throw a bone to fans.`

The action and actual Spider Man sequences may be worth checking out Amazing Spider-Man 2 in theaters but it will most likely disappoint hard core Spider-Man fans with it’s terrible changes to the villains and messy plot.  It’s not aggressively terrible but it does feel like someone needed to come in and streamline it.  We may be experiencing the dark side of Marvel’s success with their Cinematic Universe as everyone rushes to catch up but doesn’t take the time to let stories and characters breathe and develop.