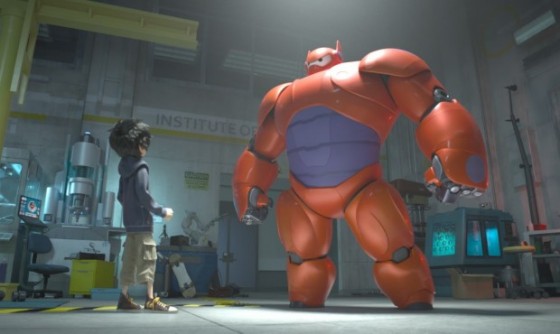 The only way Disney Animation could possibly follow up the international juggernaut that was Frozen is with their first adaptation of a Marvel Comics property, Big Hero 6.  Based on the late 90’s comic, the movie is set in the fictional city of San Fransokyo where genius teen inventor, Hiro Hamada, invents a robot named Baymax and together, they uncover a criminal plot that requires them to team up with other heroes like sword expert Wasabi-No-Ginger, Honey Lemon, who can pull anything out of her purse, GoGo Tomago, who can transform herself into a ball of energy and Fred, who can turn himself into a giant, Godzillaesque monster.  Currently TJ Miller is voicing Fred , Jamie Chung is voicing GoGo and Maya Rudolph has some an unnamed role.  The original comic team also had characters like Sunfire and Silver Samurai in their ranks.  This first trailer is just once charming scene of Hiro getting Baymax suited up in armor but I definitely get an Incredibles vibe from it.  The movie is out this November and you can check out the trailer below.